A day trip to Leigh-On-Sea 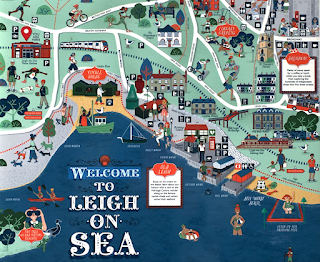 Thanks to my guided tours and online talks these past few years, I have met some lovely people who have become friends. Last month, after leading my 'Arcades and Alleyways' tour in the Piccadilly and St James's area, I was enjoying a few after-walk beers with some women who had attended the tour and, as we discussed the Southend area, an idea was hatched to meet up for a friendly, non-planned, day out in the Southend area, and this came to fruition yesterday.

We arranged to meet at Leigh-on-Sea station at 11am. My train journey to there is lovely. I caught the Overground from Upper Holloway to Barking, a delightfully varied route with contrasting views of leafy cuttings, the River Lea wetlands, shopping streets and industrial zones. Yet I noticed that most other travellers had their faces embedded in their phones therefore missing all the ever-changing delights outside. At Barking I caught the Southend via Grays* (southern route) which offers marvellous views of the Tilbury area, the Rainham marshes, the Dartford Crossing bridge, old churches, cows and horses in fields, and boats and various forms of industry along this part the Thames estuary. Lovely.

Exiting Leigh-On-Sea station there is an information board which includes the delightful map, above. We made our way down the steps to the access road that runs along the coast, taking in the peaceful views across the mud flats and the beautiful plants and flowers at the path's edge. We were tempted by the seafood in the shacks there but we abstained. 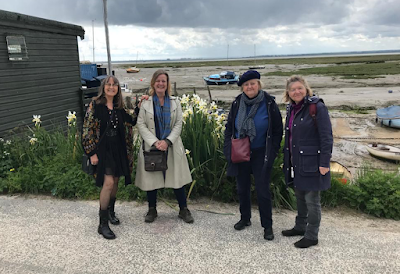 The road morphs into the High Street, still marked with Victorian vitreous enamel signs, and there lots of pubs to choose from. Lots of pubs – a condensation of inns and taverns that in bygone times would have been packed full of fishermen swigging pints of ale and smoking clay pipes after hard days, perhaps weeks, out at sea. We had a beer in The Crooked Billet, then wandered about taking in the architectural details and hints of history. We peeked in at the museum but decided as we were hungry to go back later (oops, we forgot... next time!). Then a lovely fish and chips lunch at The Mayflower.

The tide came in. Chris and Susie jumped ship at this point but Juliet and I continued eastward along the footpath and went up over the bridge to Leigh-on-Sea's residential and shopping streets where were looked at unusual headstones in the churchyard and admired the lovely seaview houses with their metal verandah additions. There are some really good independent shops in Leigh-on-Sea, many of which retain their original Victorian or early C20th fittings in the form of spindle-framed street-level windows and jazz Age era sunray glass, respectively. The rain that had been forecast for the day never really came to much and we managed to dodge the only downpour with a well-timed tea stop. Then we ambled back down to the waterside and got to the station at about 6pm noticing that the tide had gone out again and it all looked just as it had done when we arrived at 11am. 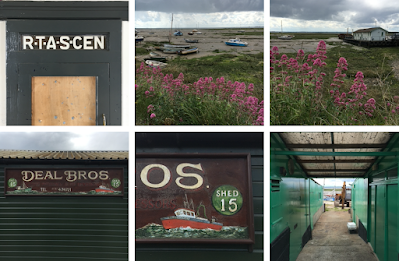 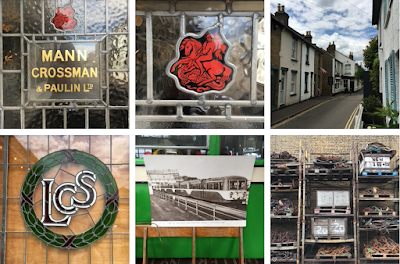 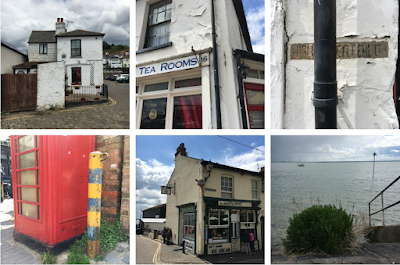 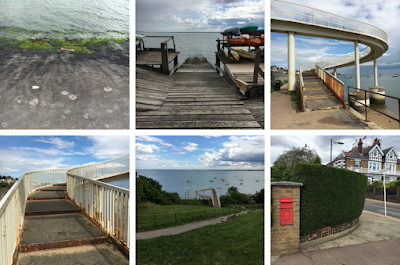 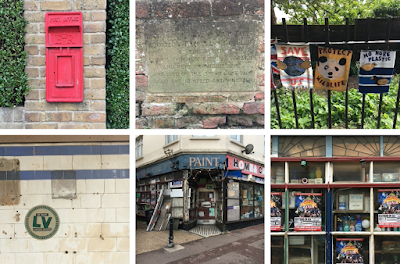 A delightful day out. We two had the whole train carriage to ourselves on the way back, enjoying those marvellous views on either side in a different, late-afternoon, light. We passed the ruins of Hadleigh castle and I thought, 'that's due another visit' and as we went past a sign to Tibury Fort I was reminded that I still haven't been there. How has that not happened?... Must go back again to this part of Essex soon. It's too nice, and too easy not to do so more often.

*spotted from the train – an old Art Deco era cinema with STATE around the top – it is hard to see from the pedestrianised High Street today but you can see it from the car park here. I have just doscovered that this is a Grade II* listed building. Wow! More info here. Considering I used to drive back and forth twixt Romford and Grays when I was in my late teens and early twenties to meet friends, to go to pubs and clubs in the vicinity, I do not recall ever seeing shopping streets there, let alone a 1930's picture house. My online wander via Google also shows that there's a fab example of an old Burton's shop there too. So let's add Grays to the list of places to visit on my next South Essex venture.