I am often to be seen walking from Holloway to Canonbury and back, and this means I use the stretch of St Paul's Rd between the two terraces of shops at the western end which still displays some hints of a bygone age or two. The shops on the right hand side adjacent to the Hen and Chickens pub are clearly older and I will return to them another day, but it's north/left side I'm going to talk about here. It starts with a single shop, No.306a, an large add-on to No.306 which is the first of six paired premises. The shops at street level have angled entrances each side of a door that leads to residential accommodation above. The door numbers are beautifully incised into the street-facing fabric of the building in a clear sans serif letterform at each side of the arches with a flower motif above them.

First, let's look at No.296, today a barber/hairdresser. Above the shop door there two small signs in the glass advertising Ogden's St. Bruno, a tobacco product that is still available today:

In the 1930s this was a tobacconist shop managed by the wonderfully-named Samuel Brilliant. On the subject of names, at No.298 in the 1910s, there was a confectionery shop run by the perfectly-named Miss Eliza Sweetland. I wonder if she was led into this line of work by nominative determinism?!

Two doors along at No.290 is Sawyer & Gray. As far as I can make out this café and homewares shop (no wifi or laptops, hurrah!) took its name from a name that was uncovered about ten years ago. Indeed, today's S&G was established in 2012. But the Sawyer and Gray of 1939 was a confectionery shop (Miss Sweetland no longer in evidence). It's really nice to see old signage revitalised like this.

And now to a location past just the bus stop and the cobbled access to the rear. At No.276 today you'll find Firezza Pizzeria. Thick layers of green paint are currently being removed to reveal shiny ultramarine blue tiles. And this suggests it was once a laundry:

A quick look at the old Kelly's directories confirms my hunch. This was indeed a Western's Laundry shop. This blue-tiled exterior being the usual style for Western's and for Sunlight Soap – see more here. Customers' sheets and shirts were collected by vans at the rear via that cobbled side access and then taken to the large facility in Drayton Park which I waffle about on YouTube here(!).  The 1915 directory tells me that this site was previously Isendure Laundry Ltd, an independendent local business that looks to have been subsumed into the Western's umbrella by the 1930s.

I really hope if they manage to clean off all the green paint and retain the blue tiles, not just for their specific historic value but for logic's sake. I mean, what is the point of painting tiles?! Tiles are washed by rain, or easily wiped.

Next door to the old laundry, at a site recently vacated by St Paul, there was a dairy/grocery store, no doubt also making good use of that cobbled side access. Throughout bygone centuries, Islington was well-renowned for the quality of its milk – that's a story you've probably heard me tell many times if you've been on my walking tours.

In 1915 the dairy at No.274 was run by a woman called Mrs David Davies. At some time in the 1920s it had become part of United Dairies, a company famous for pioneering pasteurised milk. 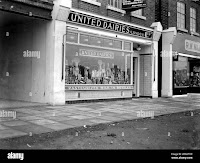 As you can see by my dodgy pics, taken through the window, the shop interior still retains much of its interwar United Dairies tiled walls -clean white wth geometric stripes in two tones of green.  The exterior still retains the panelled sections in the window glass, but the minty-green tiles and air vents at low level have been covered (or replaced?) by wooden panels. This view from 2008 shows those elements still in place when it was a chemist's shop. The archive pic above right shows a UD shop in New Eltham, dated 1933, and this gives us a sense of how this St Paul's Rd store would have originally appeared. How lovely.