Coal hole cover plates made by the Luxfer Company of Finsbury

Striding up Sackville Street earlier this week, cutting through from Piccadilly to Vigo Street, I happened upon these two unusual coal hole cover plates made by The Luxfer Company of 16 Hill Street, Finsbury (Clerkenwell), London EC.

I say 'interesting' because these two have keyholes in them, one having been subsequently filled in with a strange circular disc device. I would estimate that I have only ever spotted about ten coal hole cover plates with lockable elements within them, such as this other Luxfer example here outside 107 Gt Russell Street.

These 12-14" lids cover access holes used by coalmen to drop the black stuff directly into  bunkers/cellars below street level. Many others sport the words 'self-locking' although I am still at a loss as to how the self-locking mechanism worked. I mean, the cover plate with its tapered sides probably locked itself with a click once it was reinstalled, but surely some kind of mechanism was needed on the underside to release it pre being lifted to take delivery of the coal...? Answers and suggestions please!

The keyholes in cover plates/lids such as these are surely later additions to the original design being as they do not appear to be geometrically aligned in any way – note the difference in these two. I suggest the addition of locks was a kind of belt and braces system to foil would-be coal thieves, or super skinny child burglars gaining access to the basement area.

Lots more coal hole cover plates here in my previous posts, including some that have these bizarre keyholes within them. 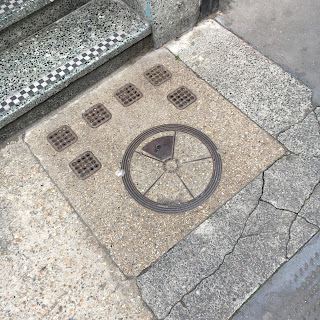 Can you believe it... two days after I wrote the above... I stumbled on another plate with a keyhole that was new to me. This one is outside 21 Riding House Street, W1. It's unusually set within a small concrete panel complete with six lightwell/ventillation blocks that must've been added at the same time.

I'll probably start noticing these all over the show from now on.