The Good, The Bad and The Unfriendly – Van Gogh Portraits at The Courtauld Gallery

The Courthauld Gallery closed its doors in Autumn 2018 for a refit and rehang that took three years , reopening in November 202. As one of my favourite London galleries I was keen to return as it's an absolute delight, both for its interiors and the marvellous pieces that hang on its walls. Thereare so many very important works of art at the Courtauld. I used to love the quirky hanging, the feel that these rooms were old and special, the mix of different centuries in each room which contrasted the ever-changing styles throughout time. I later read that this was because the artworks had barely been moved since the gallery opened in the 1930s. How cool, I liked that. 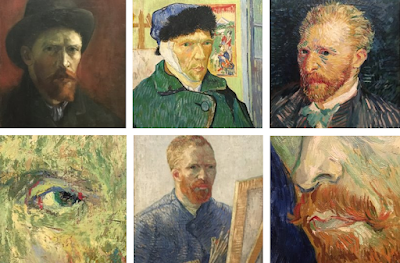 Last week I went with my friend to see the collection of Van Gogh portraits – excellent – do go and see them as this now only has a fortnight left to run, ending 8th May. But note that this exhibition is on the top/3rd floor, accessed through the upper gallery of Impressionists art. On the day we visited we had to climb lot of stairs because the lift wasn't working. I was fine, but my friend was in the wars having recently twisted his back. When we finally reached the upper galleries and entered the Van Gogh rooms we saw an exhausted elderly tall man looking around for somewhere to sit and then asking a member of staff for a stool or something. She came back with one of those lightweight fold-up chairs on which he sat looking like a very uncomfortable fisherman, his knees almost reaching up to his ears.

After enjoying Vincent's exuberant works, and spending quite a while debating whether he was left or right handed* we went for a wander around the adjacent main gallery rooms and immediately we both bemoaned the colour of the walls, especially in these rooms containing the Impressionsts' paintings, which are painted an insipid, almost nicotine-tinged, pale grey that does little to enhance the  paintings which were achieved in the glorious sunshine of the South of France, Paris and Tahiti. Surely here a deep dark blue 'feature wall' could have been implemented to lift and contrast the works within the space? Had it not been for the for the vaulted ceilings and glass above us, we would have assumed we were in any modern gallery anywhere in the world. There was no sense of personality, history or place.  Oh, and the flooring, replaced years ago with light colour solid wood, at first glance resembles cheap clip-together laminate flooring. Surely the enormous budget spent on this renovation could have stretched to a few tins of wood stain in a warmer teak/oak colour...? It just looks unfinished, complete with visible nails. The ramps installed at doorways using the same material seem to be makeshift, but they're not.

And so we made our way down to the ground floor, peeking in at each floor. The pale bland walls persist on all levels. I really did prefer the warmer earthy tones of the gallery pre-2018. Today, the much older works and religious pieces are crying out for at least a stone or terracotta ground to better enhance them. There is only one room that gives a sense of time and place and it's devoted to Vanessa Bell and her tiresome Bloomsbury cronies.

Back in the foyer, we looked for the gift shop. But where was it? You will recall that the gift shop used to be immediately to the left as you entered the Somerset House complex off The Strand – this space is now a café. We asked the young female greeter with a touch screen where the shop was. She pointed to a long thin sign on the wall that tells us what's on each level and right at the bottom it says 'shop' with an arrow pointing down to the left/right. Er, yes, "but where?" we asked. Without an attempt at a smile she gesticulated us to the Information/Tickets vestibule (which has a big sign above it!) and from there we descended another flight of stairs which took us into a thin underground corridor. I almost walked past the door to the shop which is in a recess on the left. Turns out the shop is vast, much bigger than before and bpacked full of lovely things. Yet we were only two of five people in there, one of whom was a member of staff. We walked all the way to the other end of the shop only to find that there was no other way out and we had to go all the way back again to that narrow door.

Back in the foyer the joyless female took it very personally when I quereied the location the hidden shop and how they thought they were going to sell anything from that space when it couldn't be seen/found. She evidently took it personally and suggested we could buy online! Eh?! Amused by this response, and also confused how a person who is acting as a customer-facing infomation point couldn't mamanage to communicate in a civil manner, I decided to put my overly jolly hat on and also tell her how disappointed I was, as a visitor for decades, that walls of the galleries had been painted such bland colours. She as good as shrugged. I doubt my feedback wehent any further.

Later, I googled reviews of the gallery's renovation and reconfiguration and found that nearly all the critics seem to have rewritten almost the same thing– how it's now chronological as you go make your way up the building, is a marvellous improvement, that the new cloor and use of light illumates the classical architecture, that the paintings 'sing' against the bright walls. Eh? Really? To my mind, slapping the same colour all over everything enhances nothing in particular.

It's clear to me, having received pre-press packs by galleries prior to preview days myself, that most of these critics had simply just re-hashed the promo information sent to them in much the same way as we were encourged to do in English classes back when I was 12 years old. you know, re-write this in your ownn words, etc. I noticed that only a couple of those reviews made any specific references that lead me to believe that they had indeed been to the gallery themselves and scrutinised it in any way personally.

No pics – go and check it out yourself, but note that it used to look like this.

The café restaurant to the left as you enter the couryard serves bland overpriced food on unstable tables and has a stupid ordering and payment process. I had a sort of warm chicken, bacon and salad sandwich. It was toasted only on one side, barely any chicken, soggy bacon (eurgh), half a small lettuse leafand perhaps two slices of tomato. My friends halloumi and avocado wrap was as bland as the gallery wlls. Luckily, there is a Gregg's a few doors along(!) plus the usual big names and a couple of curry houses. Actually, I'd recommend the LSE canteen on the other side of Alwych, which is excellent value. 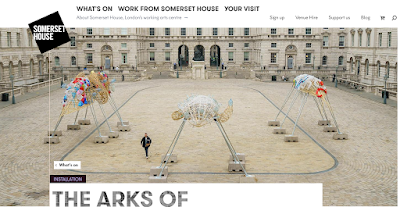 There are three large sculptures at the rear of the courtyard that look a bit War Of the Worlds. I could see that they were something to do with the recycled plastics, akin to monsters of the future. I went to find out more about them but couldn't find any info panels so I went inside the northern reception space and asked the chattering ladies at the desk. "Hello!' I said, all jolly, "I wonder if you could tell me about those large sculptures outside, only I can't find anything out there". The silver-haired woman with an accent from across the pond looked at me blankly as if I was speaking another language and informed me in a matter-of-fact manner that there were people out there with clipboards who could explain. As per the young girl in the foyer, she also didn't crack a smile, and I wondered if this was part of the training. Or, perhaps they are automotons. I said it was strange that I hadn't seen anybody out there especially as I had been wandering about for about 5mins quite plainly on the hunt for something. This provoked no response – even those self-service tills at Tescos issue pleasantries!  I moved to the sofas to readjust my clothing and a man who was passing through and had heard the exchange told me there was indeed an info panel out there on the eastern side. So I returns to the silver-haired desk robot and endeavoured to pass this news back her/it should the info be of use going forward. Again the blank stare, as if I was the mad one. Oh well.

And so I went outside and read the A-board. I finally noticed a young woman with a clip board hovering around at the north side. I stood and waited, thinking she would wander over. Nope. So I stood or paced in an inquistive manner, adopting a series of poses that screamed 'confused' involving scratching my head or chin whilst furrowing my brow and looking from the boar to the sculptures a lot. But, although I was the only person looking at these things, she didn't see me for a full 7 minutes. Yes, I timed it. She then wandered round to the west side, seemed to stare at the paving a lot, and then disppeared into a doorway on that side.

Basically, it's easier to find the info on their website. And perhaps the woman at the desk can't use the internet. Also, I don't think the plastic elements used in those sculptures are recycled... they all look freshly-manufactured to me.

*some of his paintings are most surely mirror images but others contradict that. I deduce that he was right-handed.