I am often to be heard talking about how surprising it is that many of the marvellously constructed and well-embellished buildings along Old/New Bond Street are not listed at least Grade II. This, I assumed/hoped was because the kind of companies who trade here are aware and proud of the beautiful buildings in which their products were being sold and they simply look after the heritage they inherit. Indeed, one only has to look at the excellent revamp by Victoria's Secret at the northern end of New Bond Street, where many of the modern shopfittings installed a decade ago were cleverly created with modern products to appear as if they have been there since the 1930s. The outside of that building is stunning, never mind that gorgeous glass staircase inside. 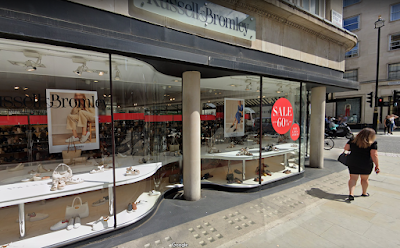 But this post is about what I believe is criminal damage/wanton destruction at 24-25 New Bond St, on the corner of Conduit Street, where beautiful, possibly unique, curved windows at ground level that meandered in and out of the supporting columns as a wavy curtain of glass, shown above (Google Streetview screengrab) are no longer there.

This building used to be home to C. J. Lytle Ltd, as shown by this marvellously evocative pic from 1948. More recently, until 2020, this was a branch of Russell & Bromley who made excellent use of the undulating glass as shown above. When R&B moved out, the street level windows were individually covered, as shown in my pic below from Feb2021. Phew, I thought, they'll be fine. 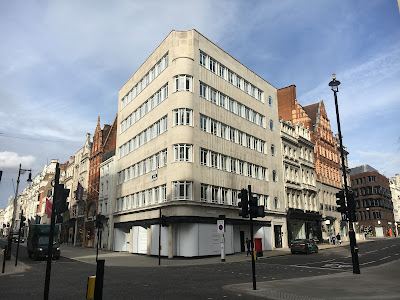 Then Balenciaga took over the building and installed bigger bright green hoardings around the curtilage (I love that word!) as shown here in June2021. I continued to naively assume that this was to protect the lovely windows, that they were simply performing a bit of TLC behind there. I mean, who would remove what surely must be some of the best curved glass in London?

But last Easter weekend, whilst walking past, leading a guided tour, I stopped in my tracks, exclaimed, "No!" and then had to explain to the group why I was so shocked, even though this was not the subject of the walk on that day.

The gorgeous curves and undulations have been removed and replaced. The windows are now flat and rectangular and the columns have been boxed in. Balenciaga are so proud of their new boxy space that on their website here they call this 'a treat' – I call it a 'blandification' and I think Villanelle, that character in BBC's Killing Eve who has been pictured sporting Balenciaga's expensive boots, would call this renovation "BORE-RING!"

It's amazing that Balenciaga didn't go the whole hog and install chickenshop-style UPVC doors and windows as this is barely a step up from that. I am so upset. But you understood that paragraphs ago(!).

It occured to be that the gorgeous glass curves were very similar to other excellent shop fronts created and installed by Pollards such as here and I was hoping that when those greeen hoardings came down I might be able to fins one of Pollards patent marks embedded in the metal edges. But now that's not possible. And, to add insult to injury, I was convinced that I had taken some good close-up photos of those curved windows a while back when R&B was still trading and these I could include as slides for one of my online talks about Art Deco buildings, but now, frustrtaingly, I now cannot find them. Let's hope they show up and I simply didn't get around to naming the files.

It's a huge loss when cleverly-designed bespoke elements like this are renovated or removed completely. A similar example can be found at No.1 New Bond Street at the Ralph Lauren flagship store, a building that resembles a Byzantine-style palace which, in 1939, was home to The National Provincial Bank, F.W.Woolworths, CondeNast publishing, and offices of the aformentioned C.J.Lytle advertising before they moved to the Balenciaga site later that year. Today the Ralph Lauren store sports plate glass at street level but here's a link to how it used to look in 1955. I do not know when the ground floor windows were altered, although many buildings of this type suffered blandifications in the 1960s and 1970s in an attempt to remove what was then seen as fussy embellishements. A similar thing occured at the Louis Vuitton store, on the corner of Clifford Street but, on the plus side, LV must be commended for a revamp a few years ago when they altered the lower external façade to echo the designs within the upper floors, which is marvellous.

I can only hope that the curved glass windows have been repurposed elsewhere. If I find out more, I will add to this post.