Whilst wandering around Camden a few weeks back I stopped to read an informative hoarding along the site that is being developed immediately south of Hawley Road in Chalk Farm Road. It was all about Camden's history and contained some interesting little snippets with web addresses for further info.
I crossed the road and entered the market building, wandering around assessing how things have changed so much in the past 30 years since I used to go there on a regular basis in the 1990s. I stopped for a while near the steps that lead down to the underground old stables markets and I watched people posing with that dreadful statue of Amy Winehouse. It was then I noticed the words above the tunnel: "STABLES MARKET SINCE1854"
Whaaaaat?!  No no no!!!

Dear reader, there have been stables for the railways' horses, and a hospital for them since 1854 but the market didn't arrive for another 120 years. Yes, 120 years later.
Back at home I started searching for further ref thinking I must have mis-read or mis-understood something.
It gets worse... 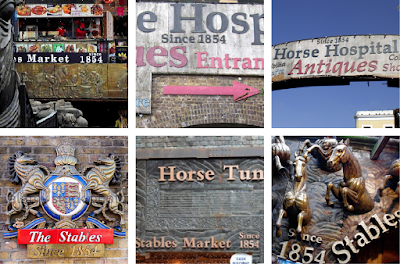 I found that not only are the current signs misleading, they are replacements of old signs (see above, top left and centre and compare them with the first three pics) and so a chance to clarify the meaning of the date as referring only to the site and not the market had been missed.
Further to that, in many cases the date has obviously been squeezed in as an add-on/afterthought as if the marketing team decided that a bit of Victorian would somehow boost sales (more about this at the end).

So let's get this straight... Pay attention please...
Pre-1972 the area that is now called "Camden Lock" was a ramshackle collection of old warehouses with a timber wharf. Some of those buildings were renovated to create workshops and. In 1973 the tenants opened their doors to the public and these included five Hornsey College of Art students who made jewellery. In 1974 they started a small crafts market on the bare ground next to the road immediately to the north of the canal bridge. The success of that venture attracted more designer-makers to the area turning Camden into a haven for artisans and artists.

With its rapid success, what started out as a small Saturday market quickly expanded to cover a wider area spreading into other adjacent spaces, such as empty railway arches and offices. The old horse hospital alongside Chalk Farm Road became the home of the antique and bric-a-brac trade. However, the labyrinth of subterranean tunnels and stables remained mostly unused until the turn of the century.
In fact you can get most of this info from Camden Market's official website. Though there are a few tenuous things in there including calling a AmyW a 'Camdonite'. Er? Where is Camdon?
for reference I have been checking through my two editions of "The Markets Of London", first printed 1983. The 1989 revised version reads of Camden Lock: "... making things and selling them is back in fashion; 'small is beautiful' seems to be here to stay... it is all very relaxed and pleasantly informal..." Not much of that is relevant now. Sad.
Camden Market is one big street food dispensary now. And Chalk Farm road is one big shoe shop). Most of the independent designer-maker, vintage or specialised stalls have moved on or given up.
Camden is now a market for the tourists now who, once they have taken that Amy Wine house pic and a couple of selfies to tick off the London experience from 'to do' list as they truffle down their stir fry at one of the picnic tables that have replaced the stalls.
The oldest market in Camden is in Inverness Street which probably started in 1860 when it was moved from the main road into the side street.