Three houses in Elwood Street, near Arsenal's old Highbury ground, have some intriguing embellishments on them. 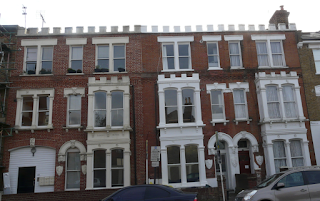 They have shields and faces of knights around the doors. And above the square bay windows are the names NASEBY, BOSWORTH and HAROLD.


I can only assume that the developer at the time (late Victorian?) was a history buff. Perhaps he was trying to commemorate some of England's most famous battles, but why show the locations of Naseby and Bosworth yet not have  Hastings/Battle on the last one rather than the name of the king who died there?
Or, perhaps, considering the house on the left has access to the rear, this could have been a builders' merchant where you could buy fancy add-ons and this was the company's visual catalogue...? This might suggest that you could commission something bespoke.
Any ideas anyone?