Mary Portas has been in the news lately talking about injecting some life into our ailing local high streets. Her solution is to (re)introduce street markets.
Well, nice one Mary – whilst I totally agree (hell, I do stalls myself; and let me tell you it ain't fun when it's raining or windy) it gets me thinking about all the markets that we don't have anymore and the dwindling sizes of some of the ones that are still clinging on. The ones that immediately pop into my mind are Lambeth Walk, Hoxton St, Chalton St, hey, even Chapel market in Angel is only half the size it used to be.
I grew up in Romford and the market was amazing when I was a child. You could spend a whole day there going up and down the aisles of stalls and buy everything from soap and vegetables to puppies and haberdashery. Mum told me stories of the cattle market that used to be there when she was young. But today it's a shadow of its former self, now being ignored by people who just want to shop in the adjacent air-conditioned covered homogenous shopping malls.
A while ago I took some photos of pages of a Picture Post from December 1938 showing Lambeth Walk how it was pre-war. Under one picture about the market it reads, 'There's all kinds of stalls including food and clothes and cats' meat . . . really more of a meeting place". I will type it all up post the whole lot up at some point in the future.
And now I recall that on a wall in a restaurant I go to in Turkey(!) there is a photo showing a bustling street market in Farringdon Road in the middle of the 20th century. I have no idea why it's there, and nor does the owner. To the left of it is another photo from the same period shows the main Britannia junction at Camden during the same period. Strange, and very out of place.
But, back to Mary; she's basically right... we're losing our town centres and our sense of community and something needs to be done to rectify this. Farmers' markets are proving popular (though perhaps their high prices deter most people on a budget), and more and more craft markets are springing up.... bring it on... more pitches for me! (it's all about me!).
Speaking of Mary, I recently went and had a look at her clothes outlet in Oxford Street's House of Fraser. I was very disappointed. Considering she is aiming at selling to women of 'a certain age' the boutique is swimming in man-made fibres; hardly appropriate for ladies who 'glow'. Where are the natural basics such as wool jumpers, silk scarves, simple cotton long-sleeved tops and Ts? It all looked like cheap rubbish to me. I left quickly and went to Uniqlo instead. Yes, that's a high street shop, not a market stall... 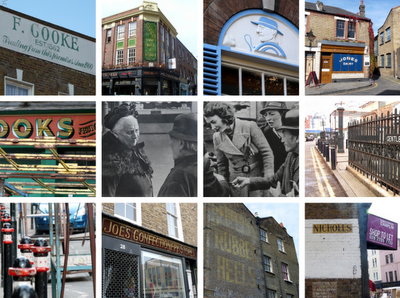