There was an item on the news this morning about cashiers in supermarkets refusing to serve customers who are talking on their mobile phones. They say it's rude. The item went on to discuss other forms of mobile phone (mis-)use and whether answering a call or text when we are in the middle of a conversation is also impolite.
Well, yes, I agree with the second part. Why do some people think it's perfectly OK to take a phone call when the conversation they are having with a person in front of them with is in full flow? It's even worse when they answer a text. The butter-in is given more attention than the person who was already being supposedly listened to.
If a human being came up in person and butted in like that, then at least there would be a chance to introduce that person into the conversation. So it follows that doing the same when a phone call comes is even more rude because the invisible person on the other end of the phone, who didn't even buy the beers(!) is being perceived to be more important.
More often than not the person taking the call then proceeds to talk on the phone in front of the friend, or worse, wanders off and leaves them sitting there. If these calls were emergencies then OK, but they rarely are. This is what voicemail is for.
As regards the supermarket situation, I don't agree. Talking on the phone when is no different to talking to a real life friend. I think the cashiers are being very hypocritical here, as many times when being served in some large supermarkets the cashier who is supposed to be serving me has not even made eye contact, even when asking for the money or giving the change. I have on many occasions had to listen to cashiers talking to each other across the tills about how the day is dragging and asking each other what time their shift ends and where they are going out that evening. They behave like the customers are not even there. Now that's really rude!
And in some small shops and mini-markets a man at the till (I have only ever experienced men doing this) is on the phone when he starts serving me and continues to chat throughout the transaction and gives me my change without even looking at me, let alone a smile or a thank you.
Enough of this.
Here are some pics that show telephones in London. 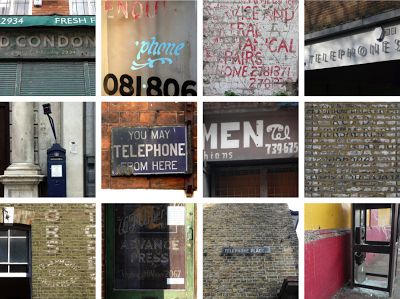