The King's Road is so named because it was Charles II's private road between his palaces in London and Kew. Subsequently large expensive houses sprang up either side and the whole area around became a magnet for the wealthy and upper classes.
In the 1960s the road had a revival and was really the place to be seen. Rock stars, models, actors and actresses lived and socialised there. It became a hothouse for new design talent, with one-off boutiques selling all kinds of trendy and avant garde creations – Mary Quant and Dame Vivienne Westwood both opened their first shops there. River Island started out in King's Road as the Chelsea Girl brand.
In addition to this there were plenty of antique dealers, most of them renting space in the wonderful Art Nouveau Grade II Antiquarious building. It was the oldest antiques emporium in London. But two years ago the antique dealers were 'evicted' in favour of an American clothing chain.
So, sadly, these days the King's Road is just like any other homogenous high street or retail park selling over-priced mass-produced fashion. I have written about this kind of thing before. And it saddens me.
But all is not lost. One just has to look harder....
There are still plenty of designer-makers out there creating wonderfully individual and handmade things, and on this Sunday 4th November you will be able to find many of them at the first of We Make London's Christmas Fairs at Chelsea Old Town Hall from 11am until 5pm. £2 entrance fee, but well worth it, if only to be inspired into making something for yourself.
Also available on the day will be Inspired:London, WML's lovely book showcasing 162 London-based designer makers. The book will not be available on general sale until mid-November but pre-launch copies will be available on the day at a reduced price of £10.99. (Be sure to check out page 33!)
Hope to see you there.
Here are some images from in and around the Town Hall and Kings Road: 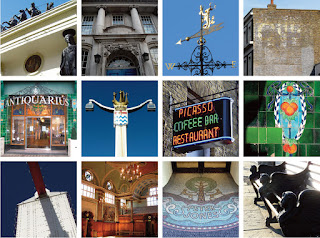