Remember, remember the fifth of November

Last night I was invited to celebrate Guy Fawkes Night at a fireworks party on the roof of One New Change, opposite St Paul's. The event was billed as The Carling Winterzest Bonfire Ball; a title which turned out to be rather misleading...
I took along my friend Malcolm as my +1. He has written on his own blog about his distaste for this building, but I thought he could easily be won over by a beer, fireworks and fabulous views of the city. We had a good, fun evening, and laughed a lot, but that's just because we usually do. But it wasn't a ball. And certainly not a Bonfire Ball.
Let me explain...
The drinks: I am an ale, red wine or Guinness drinker and I hardly ever touch bottled lagers unless I am abroad. But hey, there were crate loads of Zest, Carling's new winter lager to be quaffed. This turned out to be an pissy orange flavoured liquid served ice cold. But it was free!
The bonfire: Ooh it was cold on that roof, what with it being a clear night. there was a bitter chill in the air and those beers were making us colder. Good job I wore gloves. But where was the bonfire to warm our bones? Turns out they'd made a pretend bonfire – a small collection of 'wood', LED lights and red net material, the type used for underskirts, had been fashioned into the shape of a bonfire. A girl with LED hula hoops gyrated around it. There were only two outdoor heaters and, of course, anyone near them wasn't about to move. I never did see any of the sparklers they promised us on the way in. But the fake autumnal trees with their red leaves were pretty. So that's good.
The food: Admittedly, food wasn't mentioned on the invite, but when a few small plates of strangely sweet sausage on bread things were brought out, they were quickly pounced upon. I doubt there was enough for one per person. Why bother? A man was offering hot chestnuts. I prefer my nuts to be nutty, so I declined.
The fireworks: The view was, as expected, really good, especially as the night was so clear. Fireworks displays could be seen off to the south in places such as Crystal Palace, and Deptford. But it was a bit disappointing. Not like being underneath an actual display. We couldn't hear the bangs and whizzes.
The music: I am a bit confused here... at 8.30pm a DJ started playing some tunes. Then another fella joined him. They played songs we knew. We danced about and had fun. Yes, Malcolm moved in time to music! Alert Paris society!
Then another fella played trumpet over Dizzie's 'Bonkers'. It was good. But was this really Rudimental who was listed to play there? Perhaps it was just a couple of them. I dunno. Answers on a postcard please.
So, to conclude, if you like weak lager with a hint of fruit in it, then Zest is the one for you!
Rather than include pics of fireworks, St Pauls, or alcohol, I am here again posting my set collection of fire insurance markers which are still apparent on a few old frontages around London. In the days before the London Fire Brigade was created, insurance companies had their own fire crews and if a building went up in flames only the company with the badge on that building would douse the fire. Harsh! But a clever marketing ploy.
More info here. 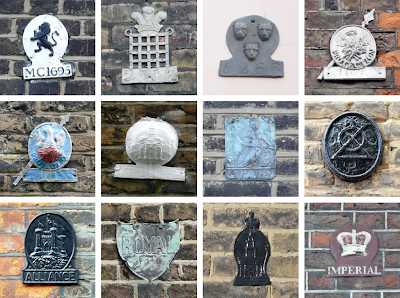