The Hollow Crowns of London

Watching the brilliant versions of three Shakespeare plays on BBC TV these past few weeks, it occurred to me that I have a lot of images of London places and pubs with nice crowns within them.
If you can't understand my thought process here, the BBC has brought together the plays Richard II, Henry IV (parts 1+2) and Henry V, and collectively called them The Hollow Crown. If you missed them, are really worth catching up with.
I did Henry IV at school for 'O' Level and remember when our English teacher asked the class to learn Prince Hal's 22-line soliloquy from Part 1. The following day he went around the class asking us at random to recite it and, it was quite evident that hardly anyone had bothered to learn it. Each of us managed one more line than the last, having only just learned it. I was picked on fifth, and can still only recall the first five lines. Then Marion (the girly swot!), managed the whole thing. Ooh dear; Mr Price was not pleased with the rest of us!
Below are some London crowns; on fire insurance markers, pub signs, a Mercers maiden, some chimneys, a stink pipe and two cheeky lions. 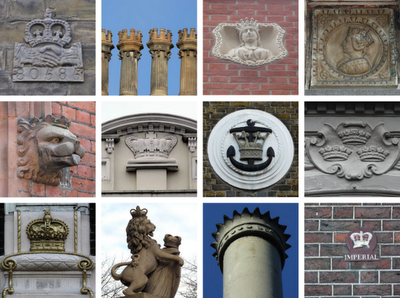