Last Tuesday evening I went to an 'event' at the British Museum about the rebranding of the area that encompasses Holborn, St Giles and Bloomsbury. Well, dear readers, you probably know what I think about this as I have written about it before here and here. So I was hoping to be enlightened and find out about the proposals for the area.
But all we got was a teaser film and a few people telling us how great the area is (yes, yes!) followed by the full 15 minute film which consisted of endless shots of Sainsbury's and way too many references to Crossrail, complete with animated graphics showing how a train travels in a tunnel underground even though the MidTown / Midtown / inMidtown area (I am still none the wiser) will not actually contain a Crossrail station.
It threw a lot of a balls into the air but didn't give any ideas or possible solutions for discussion.
For instance, the film was so vague, contradictory and repetitive; it attempted to promote how great the area is, yet showed a graphic of a generic dirty kerb morphing into a grassed-over pedestrianised street with new shops, but there was no real explanation where this was intended to be (High Holborn?).
There was a lot about how the roads are congested and, hence, the public transport ought to be upgraded. Anyone who has sat on a southbound bus near Russell Square will attest to this. According to the talking heads within the film, tourists are confused/lost when they exit Holborn station and don't know how to find the British Museum. Has anyone thought about erecting some decent signage? It ain't rocket science! Banners banners banners! 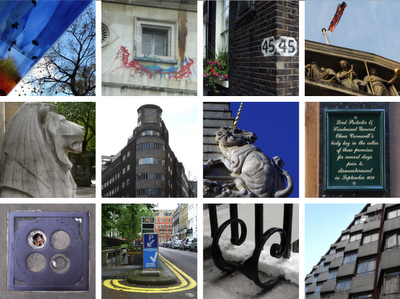 When the film finished we were invited to go out into the foyer and have a discussion about what we had seen over drinks and canapés. The canapés were the best thing about the evening. The red wine was good too. Chatting to other people, most of us agreed that the presentation was clearly aimed at businesses and investors, telling the uninitiated how this area in the middle of London is indeed in the middle and a great place to live, work and socialise. If idiot businessmen do not know the (Holborn) area is there in the first place, then it's evident that they can't really see much further than their noses. Or read a map. Perhaps they can't recognise a good opportunity unless it's got a Starbucks and a phone shop next door? Do we really want these people here? Are we dumbing down for them? Will this put up rents even further and force out those few small businesses who were (sort of) featured in the film? Nothing seems to have been thought through. Sigh.
And I am confused as to why I was invited to attend, along with a few other bloggers, London writers and non-business types. I think they may have seen my earlier posts and were hoping to prove me wrong.
One more thing...  the shape and size of Midtown has changed since my earlier postings; it has shrunk and now resembles a gecko hovering over New Oxford Street and part of High Holborn with its legs obliterating the British Museum and that Renzo Piano monstrosity which is home to big foreign companies such as NBC the owners of this blog.
Are we about to get another homogenous makeover? Why does everything need to be glass and plastic these days? They ought to be promoting areas like nearby Lamb's Conduit Street and its adjacent Georgian streets.
I'll stop now. Here's a more rational report of the evening.