Walking along Long Acre the other day, looking up at the buildings, admiring the historical details as I do, I kept noticing the same motif of a woman. Then it occurred to me I had seen her before in the City – she is the symbol/coat of arms of The Worshipful Company of Mercers, an association of merchants who dealt with the luxury end of the textile trade. Hence, in Covent Garden, we have Mercers Street and what used to be The Mercers Arms in Shelton Street. These days this livery company is more of a charitable concern.

In 1614 the Mercers leased the area north of Long Acre, then known as Elmfield, to Thomas, Earl of Exeter, who subsequently sold it on to Sir William Slingsby. Incidentally, both of these men are also now remembered in street names of that area; respectively, Earlham Street, Neal Street and the shopping arcade Thomas Neals, and Slingsby Court). The buildings they erected on this land displayed the Mercers’ symbol to show ownership. Indeed, the Mercers still own the coloured areas on this map today.

The Mercers’ Maiden, first appeared on a seal on 1425, and is always depicted in 'Flemmish Rennaisance' style with long hair, expensive clothes, a necklace/chain, a crown and, as as my male friend pointed out to me, more often than not she has rather pert breasts with distinguishable nipples (!).

She can be found not just in Long Acre, but on all sides of these buildings, carved directly into the masonary or brickwork, or within a plaque above a door or between windows, or etched into glass, or depicted on door brass knockers. (Knockers!) 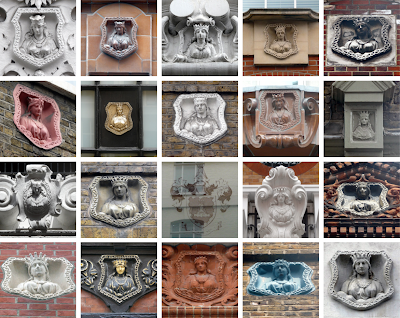 Email ThisBlogThis!Share to TwitterShare to FacebookShare to Pinterest
Labels: markers and plaques