From the age of about ten I started to write a diary. It became an obsession; I thought missing a day would be terrible – what if something amazing suddenly happened and I hadn't written it down?!
I continued the ritual until about eight years ago when I was finding it a bit silly, what with boyfriend, job and other commitments. It's not like anyone else ever cast an eye over my thoughts (not that I would have cared if anyone did read it; it was, of course sort of coded, with nothing specifically spelled out). If anyone had bothered to read any of my musings I doubt they would they have cared about what I'd had for lunch or what I thought of that woman in Safeways. Looking back on past writings now, I wonder who the hell was John/Jim/Mary in the pub that night who I thought was worthy of a mention for being so funny? They have been lost to me now.
I hated to miss a day and would sometimes play catch up, so I would scribble something down before I went to sleep most nights, so the funniest days to read back on are the almost indecipherable scribbles and rantings written when I got in at 3am rather the worse for alcohol.
I never took my real diary away with me on holidays because I was scared I would lose my it, so I would write in a notepad and then copy it all up when I got back. How bloody ridiculous is that?! What if the house burned down in my absence? So I just had to stop.
These days I just stick to keeping a day diary which I fill with notes of to dos and appointments. And I still prefer to write things down on paper. With a pen. Yes. Really. It's much faster than typing into an all-singing all-dancing do-it-all phone.
I used to get the wonderful Time Out diary because it's packed out with useful London info. But it took me about 12 years to realise I never really consulted said info. So I downsized to anything I could find in a pound shop. Sometimes I'd even find one with a free pen attached. Result.
But this year I have treated myself to the little gem that is Santoro's London Underground Pocket Diary with it's tube map on the outside (no flicking to some miniature thing on the inside back page) and tabbed months and planners in the colours of the tube lines.
I also have another diary which is really quirky but is really aimed at those people who don't really keep diaries – Keel's Simple Diary. Available in a range of gorgeous colours (mine's the lovely Dark Red), as they say on the blurb it "entertains, helps you focus and keeps you company". Every page is open for you to write in it as and when you please. There's no pressure to write every day. In fact you could take years to fill it in. Or not fill anything in at all because every page/day throws up thought-provoking suggestions, questions, ideas and quotes. It's really novel(!).
Here are some of my photos of London dates taken from my larger collection on Flickr. One of these was in the news earlier this year. . . 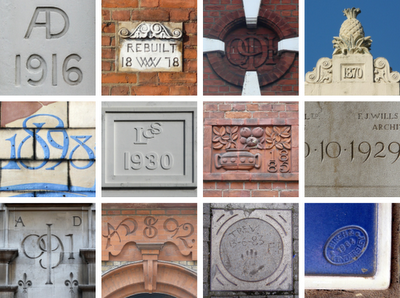