When most people were opening presents or stuffing turkeys I was walking around an almost deserted West End with Peter Berthoud and a group of like-minded souls.

My walk started at 9.15am when I set off from Holloway, taking every opportunity to walk in the road. Because I could. People that passed me said 'hello' or 'merry Christmas'. How nice. It wasn't until about noon that tourists started emerging from their hotels.
I kept stopping to take photos on the way but still managed to be only five minutes late to meet Peter and the others under Admiralty Arch at 10.30am.
He led us up St Martin's Lane, into Covent Garden and Seven Dials, across to St Giles, over into Soho, a meander along the blissfully quiet and empty Oxford Street, then down Carnaby Street and Regent Street, across Piccadilly Circus and into Leicester Square, ending up with a few pints in the Bear and Staff.
Peter pointed out some things I had never spotted before such as little bits of street art and that donation pipe at the side of the House of St Barnabas on Soho Square – how on earth have I managed to miss that all these years? Ditto the story behind one of the statues on Trafalgar Square, and Renzo Piano's rationale for the colours of those bullying buildings at St Giles. I also spotted a few new things of my own along the way (fire alarm bells with old telephone codes etc, a bizarre green plaque etc).
All in all a really nice day. I met some lovely people and learned some new things. Then, when I'd tramped all the way home again, I made myself a bowl of comfort food and watched TV until I dozed off... lovely.
Peter says he enjoyed doing the three walks so much that he plans to do them again next year. Good on him! 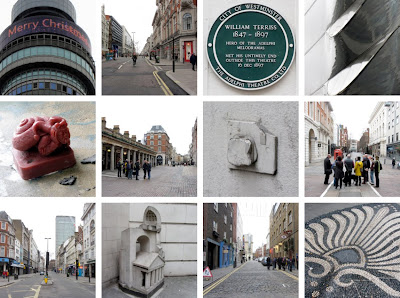