If you haven't discovered The London Column yet, then get with the programme now... because it's a gem of a site.
The strapline at the top reads, "Reports from the life of a city, 1951-2011, by David Secombe", and it's just that.
It's only been up and running since May this year but it's already packed full of gems and snippets of London life and observations. I have particularly enjoyed reading the excerpts by written by V.S.Pritchett in 1962; especially the one about the Blitz.
One thing that intrigues me about this lovely site, and that's David's logo top right... from 70s–90s, there was a magazine about typography called U&Lc that had its logo in more or less the same style. I suspect the logo design for The London Column has been created as a fond pastiche... very clever!
Here are some nice bits of typography I have found in London: 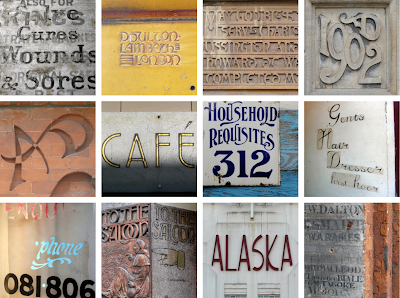