Walk The Lines by Mark Mason

There are lots of book about London. You'd think there couldn't be any more to write but every now and then someone comes up with a new idea; a new take on things...
Mark Mason has walked the entire London Underground overground, by which I mean he has followed the tube lines at street level. His book 'Walk The Lines' tells the stories of his journeys, covering hundreds of miles. It's a great read... full of wonderful London facts, amusing trivia and meetings some odd and interesting people. I like it a lot. Here's M@'s review.
I am now singing that Wombles' song, which reminds me of Steven Smith's wonderful Underground London. I keep saying I won't buy any more books and will instead just borrow from friends or the library, but every now and then another one comes along that I just have to have. I need to put up some more shelves. These are nice. 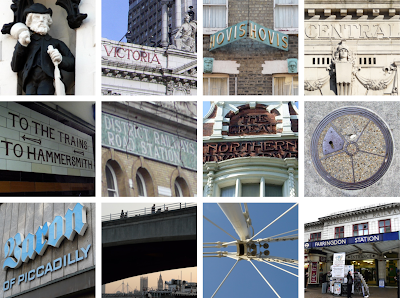 Top: Mason in Battersea, Victoria in Victoria, Baker[loo] in Tottenham, Central in Holloway
Middle: Hammersmith in Holloway, District at Gloucester Rd, Northern in Hornsey, Circle in Bloomsbury
Bottom: Piccadilly in Piccadilly (but no more; RIP), Waterloo in Waterloo, Jubilee at Hungerford Bridge, Metropolitan at Farringdon.