In my previous post I wrote about a drive about in London on Christmas Day which somehow included a jaunt up the A5 to Colindale. On the way back we stoppped along Hendon Broadway to check on a few ghostsigns. The street has a sense of Victorian-into-Edwardian faded glory. The last time I had a good wander about there was 2011 and I was keen to see how many of the signs I'd seen back then were still visible today. 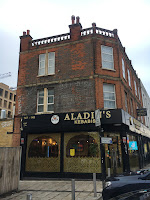 The first old hand-painted sign that looms into view on the left as you head northwards, above what is now Aladin's Kebabs at No.147-9, is a sign for George Frederck Kruse. On south-facing wall, to left, it's easy to make out 'Estate Agent' in angled Coca-Cola-esque script complete with what I call an underswoosh. Above that, to the extreme right, immediately above the horizontal bar between the windows, there are remnants of some lettering that I think includes '[Local?] & Adjacent Districts' and 'APPLY' which could be followed with 'within' as has been suggested, but I am not so sure about that seeing as the much easier to decipher section below directs us to another address:
GEO. F. KRUSE (in an arc) / 50(?) YEARS IN HENDON / AUCTIONEER & ESTATE / –> AGENTS <– / Opposite Hendon Statn. N.W.4 / PHONE HENDON 1115. / Management of Property a Speciality

The estate agent shop at 32 Station Road would have been directly opposite the Hendon railway station here – there is no number 32 there today and the postcode written on the sign is given as NW4 which is the eastern side of the tracks.

I did a quick bit of googling and discovered in the National Archives that during WW1, George, then living at just round the corner at 89 Audley Road, NW4, appealed for exclusion from National Service, claiming that 'serious hardship would ensue' due to his 'exceptional finance or business obligations' – I haven't pursued this any further as yet to see if he was successful. 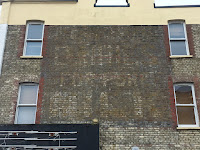 Just up the road from here, at No.163 on the north-facing side overlooking Milton Road, is another faded sign advertising dairy products. It's fairly obvious that the who wall was once slatered in lettering and there have been many over-paintings throughout the decades which are hard to decipher today. However, eleven years ago I could clearly see that the centre section read: "BARRIES / FOR PURE / MILK" – I haven't been able to ascertain if thtis was alocal company name or a product. 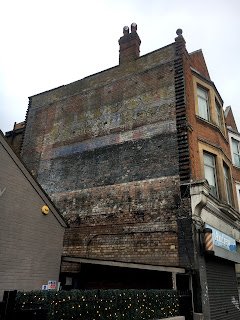 If you spin round from the Barries sign and look north along the same side of the road, you'll see at the side of No.177 there is a nice surprise – a boxed sign used to cover a large proportion of this wall and it has in the last few months been removed to reveal elements of a Gillette safety razor ad. there are also hints of other layers of signage here – a palimpsest of advertising on this south-facing side wall.
I think the very large red lettering is for DAILY MAIL and there are other panels of faded blues and reds. Black block lettering at low level reads 'FOR SALE' with a more friendly script in white behined or over the top of it.
How jolly intriguing and this must look fab on a sunny day with better light.

Further up the road there has been a fair bit of demoliton, rebuild and renovation since I was last there and this has meant the loss of two Co-operative Society signs. One used to be on the north-facing side of No.197 with a second, south-facing sign on No.201. The second one, shown last here, was a sign I particularly meant to return to another day when the light was better and I was armed with a good zoom lens, because it had lots of white block lettering at the top and, in a sort of script at the bottom, it read: '...other members'.
It's interesting that a Co-op grocery store today occupies the site. 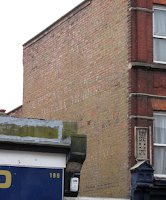 For more research on all of these signs, indeed the changing face of this street, more info would require access to the old Middlesex directories or a visit to the Hendon archives. Any feedback welcome.