A Christmas Day drive round London.

With no Congestion Charge and no Ulez restrictions my mate Malcolm drove over to Holloway from Notting Hill to pick me up at 9:30am. No plan. Just drive about wherever.

From Holloway we went straight  down an almost empty Cally Rd then passed Kings Cross, St Pancras and Euston railway stations, before heading down to Regent Street and round the three sides of Trafalgar Square, along Strand, round Aldwych and along Fleet St, though the City and into Whitechapel. A right turn at Mile End, down to Stepney and through the Rotherhithe Tunnel to Bermondsey. Then the first of many bridges... over Tower Bridge, down along Lower Thames St before heading back south via Southwark Bridge. A peek at the vast hole where the Elephant & Castle shopping centre used to be then across Lambeth Bridge, along Millbank past TateModern and over Vauxhall Bridge. Then along Albert Embankment, over Westminster Bridge, round Parliament Sq, up Whitehall to Traf Sq, into The Mall, stopping to watch some mounted guards, down Birdcage Walk to Buck Hse and back again along St James Pk to Westminster, along Victoria Embankment, up Northumberland Ave to Pall Mall, along Piccadilly to Knightsbridge and into KenGdns/HydePk opposite the Albert Hall where we parked the car and got out to look at the views across the Long Water and The Serpentine. But it was freezing cold out there, so back into the car...

Exited the park at Lancaster Gate. Investigated streets and mews nearby before heading up Edgware Rd and following Watling Street, the old Roman rd, through Maida Vale, Kilburn and Cricklewood where we looked at old signs and railway cottages, and then across the A406 North Circular Rd, to West Hendon to check up on a few more ghost signs. For some reason, perhaps unable to decide left or right, we continued northwest into Colindale where we stopped for Christmas Day lunch at a KFC. 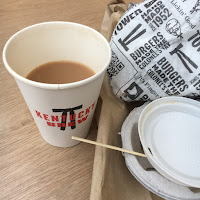 Warmed by spicy chicken baps, chips and alcohol-free hot drinks, all of which we were pleasantly surprised by seeing as neither of us had eaten the Colonel's fare in a decade or so, we rejoined the North Circular and travelled clockwise to investigate Hampstead Garden Suburb, wondering how people who live there cope being so far from a pint of milk. And then back to Holloway via Highgate Village. A lovely way to spend the daylight hours. But it’s also nice to be back indoors cosy and warm.
Tomorrow I will post about the ghostsigns I snapped today.
Ding dong merrily, whatever rocks your Christmas boat, Jane