I've been wandering the streets a lot these past few weeks. Either just following my nose, investigating places I don't know so well, or planning walking routes for the future.

I was recently near the River Lea in the in Clapton area and thought I'd best go and check on a couple of old bits of signage near the main drag to see if they were still there. And indeed there were/are. 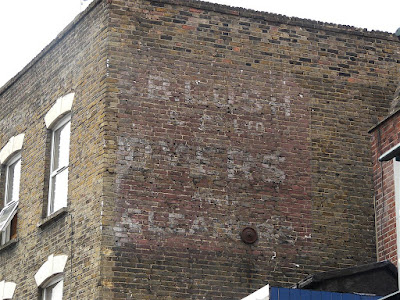 Just east of the roundabout on the north-facing wall of 203 Lower Clapton Road, today a Ladbrokes betting shop, there is this a hand-painted sign for S. B. LUSH & Co. Ltd, dyers & cleaners, rendered in white 3-D effect block letters on a red panel. If we look back to 2008 we can see that it's in reasonable condition because it was, up until then, covered/protected by a boxed sign.

A bit of sleuthing shows that 'Lush & Cook, dyers' were here from at least 1896 until the first few years of the 1900s and by 1901 the name had changed to become 'S. B. Lush & Co' – I wonder what happened to Mr Cook? So far I have not managed to ascertain if Messrs Lush and Cook were here pre-1896 but I have found evidence of S.B Lush & Co at some very well-to-do locations in central and NW London. For instance, in 1891 the man/company was at 6 Wigmore Street, W1, and also at 1 Motcomb Street, W1, 38 Ladbroke Grove and 105 St John's Wood Terrace – so this really gives us a sense of how upwardly moblie this area of Hackney was at the end of the 19th century. The company had gone form here by 1904 when this became the premises of a milliner, followed the following year by a piano maker. For the period 1908-14, it was a confectioners, owned by a Mr. Thomas Taylor. So now I'm asking, what happed to Mr. Lush? 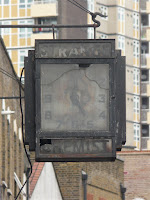 I continued my walk southwards to the corner of Downs Road where I was surprised and rather pleased to see that the filthy broken 'Art Deco' era clock for Strange Chemist is still hanging in there above today's pharmacy which still bears the same name as it did in 1939. They really ought to, at least, give this old timepiece a clean-up.

Then round into Downs Road, and immediately left into Clarence Road. On the right hand side, a little way along, on the side of No.163, there is a double-layered sign. I stood looking at it, amazed that it was still intact, albeit faded. It appears that over a century ago, a hand-painted sign on the wall was covered with wooden planks that were used as the basis for a secondary sign. The wood is held in place by an angled arm of metal. It's hard to believe how this structure is still there! 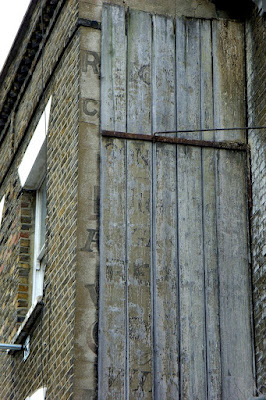 The wooden sign is very bleached and faded today and there is barely any paint left, but my pic here from July 2008 shows how the letters on the boards were almost discernible and would have been even clearer had I vistied it a decade previously. I think I can make out the word 'dealer' two-thirds of the way down here. As for the sign underneath, the tantalising letters peeking out at the left hand side of the boards, give little away but there's a letter R at the top, so my guess is that the sign could be for Miss Ann Reynolds, haberdasher, who was there in 1901, and/or William Richardson, builder who was listed as being next door at No.165 in 1914.

This is so bizarre enigma, don't you think? Just what was the though process here? Was the second sign menats to be temporary? Because, surely it would have been easier to whitewash the first sign and then over-paint it. Does anyone have any other ideas?

Please do let me know if you have any further info on any of these..