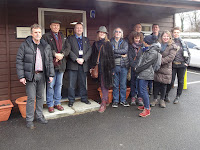 One Sunday a few weeks back I met up with a small group of London Historians for a tour of HMP Wandsworth. The pic shows us standing outside its small but jam-packed excellent museum which is open by appointment only.
The tour didn't start until noon. It was a clear, though chilly, day so I headed to Clapham Junction early to check up on a few things.
I exited the station via Old Brighton Yard which affords excellent views across London from the covered pedestrian bridge above the platforms. Note that you need a ticket to access this space; it's not a right of way.
I then turned right and walked westward along St John's Hill towards Wandsworth because I wanted to check up on a couple of old ghostsigns and shop fronts that I know from years ago when I used to work occasionally in the area.

After the tour of the prison which, by the way, was excellent, a few of us went for a quick pint in a nearby pub full of children with colouring pens (go figure) and then, realising the light was fading fast, I marched across the common and over the railway bridge to get to the southern end of Northcote Road for a Battersea update.

And then I crossed over Battersea Rise into St John's Road and noticed a palpable change in environment. The Rise seems to split two kinds of shopping areas; the yummy mummies with their lattes and buggies on one side and a regular high street on the northern side with all the ubiquitous names.
The impressive Arding & Hobbs building sites diagonally opposite Clapham Junction Station and its distinctive cupola is visible for miles around.

I used to shop at A&H/Allders in the 90s and early 00s but it was clear to me then that the shop really needed to play catch-up with other stores of its kind. The company went into liquidation in 2005 and the building now is home to the Debenhams chain.
I really must go back in the Spring for a proper poke about.
More info on the SW11 area in this draft document written in 2013 by English Heritage.
If you are interested in becoming a member of London Historians please do mention that you heard about it here, from me. Thanks