Over the past few weeks a community of devilish little foam men has been appearing around the junction of Grenville Road and Hornsey Road, London N19. I first noticed these characterful people made from pipe lagging two weeks ago but it wasn't until yesterday that I had a chance to take some photos.
I think they are marvellous – they have so much personality. When I was taking these pics no one else in the busy street was paying them any attention. What is wrong with people?!
A couple of the original ones have already gone and others have been damaged such as the second one on the bottom row which in the first week was walking down the post and then last week he was doing some kind of circus pose (one limb having become unattached. Now he's legless and looks like he is clinging on for dear life!
Some have a Christmas theme – note the santa hats. One is hanging from a scaffold firing what looks like a ray gun or it might be spray paint – he has two canisters on his back and more in his thigh pockets. Another little foam fella is sat above the burned out shop lighting a cigarette with his face covered in soot.  The group of three angels/sprites is amazing and reminds me of the sprites in Midsummer Night's Dream.
I have no idea who made these artworks. Someone is evidently busy  at night time scaling ladders armed with cable ties. I have googled and come up with nothing. I went into the upholsterer's on the corner of Grenville Road but the girl at the desk didn't have a clue about the artworks and neither did she seem to care much and those three fabulous angels are right outside her window! I am now wondering if Deti's Deli Cafe might be involved seeing as one of the yellow fellas is walking down the wall following arrows to there.
Hmmm... This needs more investigation. I will keep returning to this junction to see if more little yellow men appear and will post pics and updates here.
Whoever is doing this, I salute you. Thanks for brightening up the world with street art that does not deface or damage anything. 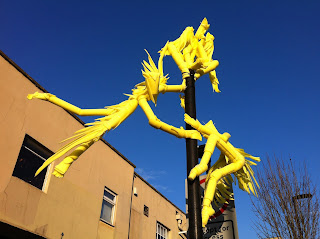 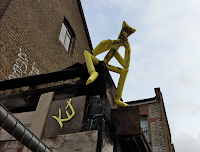 Update:
On Christmas Eve I noticed the name Kit at the foot of the smoking man – see pic to the right. Perhaps this has been there for ages and I missed it before.
I asked the man who runs the convenience store below if he knew who Kit was and he says he thinks it's a customer who uses the shop.
I have an idea that Kit the creator lives above the shops near the carpet store... am I right?  Do tell.... ;-)