Foraging and dangling... and a free potato

I have been out and about a lot this weekend.
On Saturday I visited Boston Manor and Brentford which I will write about soon.
And then yesterday I met up with a group of friends for another forage on the foreshore. This time we went to the stretch of beach at the foot of Ratcliffe Stairs, Limehouse. 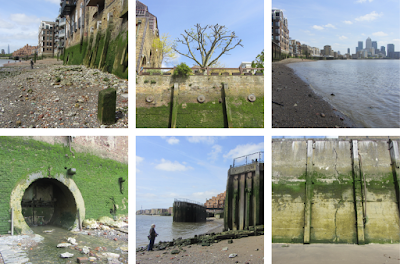 It was a glorious day and we stayed there for hours collecting bits of old clay pipe, broken pottery, eroded wood, animal teeth, rusty metal etc, and even managed to catch a glimpse of The Red Arrows flying towards Central London for the VE Day commemorative celebrations.
After a pint and a sandwich at The Old Ship, six of us then went to Greenwich Peninsula to check out The Urban Village Fete at North Greenwich which we all felt was rather disappointing, so hurrah for the thrill of the Dangleway!! 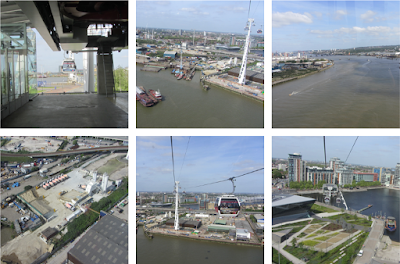 Only one of our group had been on the £4.50 'ride' before [read his account here] but, for the rest of us it was huge fun – like a fairground ride. I have no idea what the in-built commentary was saying because we couldn't hear it above our squeals of excitement. Such a great view, and a perfect day weather-wise.
We landed (disembarked?) on the North side in an area once covered by the Royal Victoria Dock which now resembles... ooh... everywhere and nowhere because, apart from a few cranes and well-developed dockers' mistresses left around the edges of the quay, it could be anywhere bland and characterless in any city in the world really.
We found a nearby cafe with outdoor tables. My baked potato was so tasty that when I mentioned it to the waiter he gave me a free uncooked potato to take home. How sweet.
A lovely lovely day. Thanks all.

One gripe... for me, getting there necessitated a change from the DLR to the Jubilee Line at Canary Wharf. Despite these two relatively new stations having the same name and being shown on the tube map as an intersection, it's somehow necessary to exit to street level, hunt for scant signage/directionals, navigate escalators and pedestrian crossings etc, in order to make the connection. The only conclusion for this appalling bit of contemporary planning is that it's been designed to make us get lost and be distracted by the shops and restaurants. Bad bad bad.