Breaker's Yard at Sutton House, and a walk through Clapton and Stamford Hill

Sutton House, Homerton, is North London's oldest residential house. Built in 1535 by a rich courtier of Henry VIII, it's now owned and managed by the National Trust.
I finally went there last Friday for a guided tour. The house is just what you'd expect from an NT property – history, eccentric past owners, wood panelling, tea rooms etc. But I was more interested and impressed by the ingenuity of Breaker's Yard, a paved garden that has recently opened on the land adjacent to the the house which in centuries past used to be part of a tannery and, more recently a breaker's yard, hence the name.
This inspirational garden contains all kinds of creative and interactive elements including planters made from huge tractor tyres, recycled rainwater, a vegetable garden, a sand pit and, my favourite elemnt, a double-decker caravan that has been transformed into a mini stately home using reclaimed panelling, an old staircase, a wooden chandelier and other decorative elements. I'd just love something similar in my own garden! Read more here.

After the tour I decided to walk through Clapton along the A107 and on my journey I spotted quite a few things that were either new to me or had changed since the last time I really took a good look along there.
For instance, in the lobby of St Andrews Mansions at No.157 Lower Clapton Rd there are some lovely tiles (see top left, below). However, the sister building next door does not retain the same.
The toilet block T the end of Millfield Road is still closed and surrounded by blue boards – that's at least six years now. Somebody do something please! Question: why are hoardings like this always painted bright blue? Answers please.
I popped into the gardens that surround nearby Clapton Pond, sat for a while with a sandwich and read the info board about the conservation area. Glad to see The White Hart pub falls into that zone and has, since I was there last, had new life breathed into it. And an old carved, recessed sign is now visible along the front reading, "The Clapton Hart". I am still waiting to see what becomes of the old cinematograph building next door.
Across the roundabout, I noticed the change in colour within the brickwork on the side of the old tram depot which I think shows where the ramps used to go up to the second floor. Further along, on the corner of Cleveley's Road, there is a clunky old optician sign. 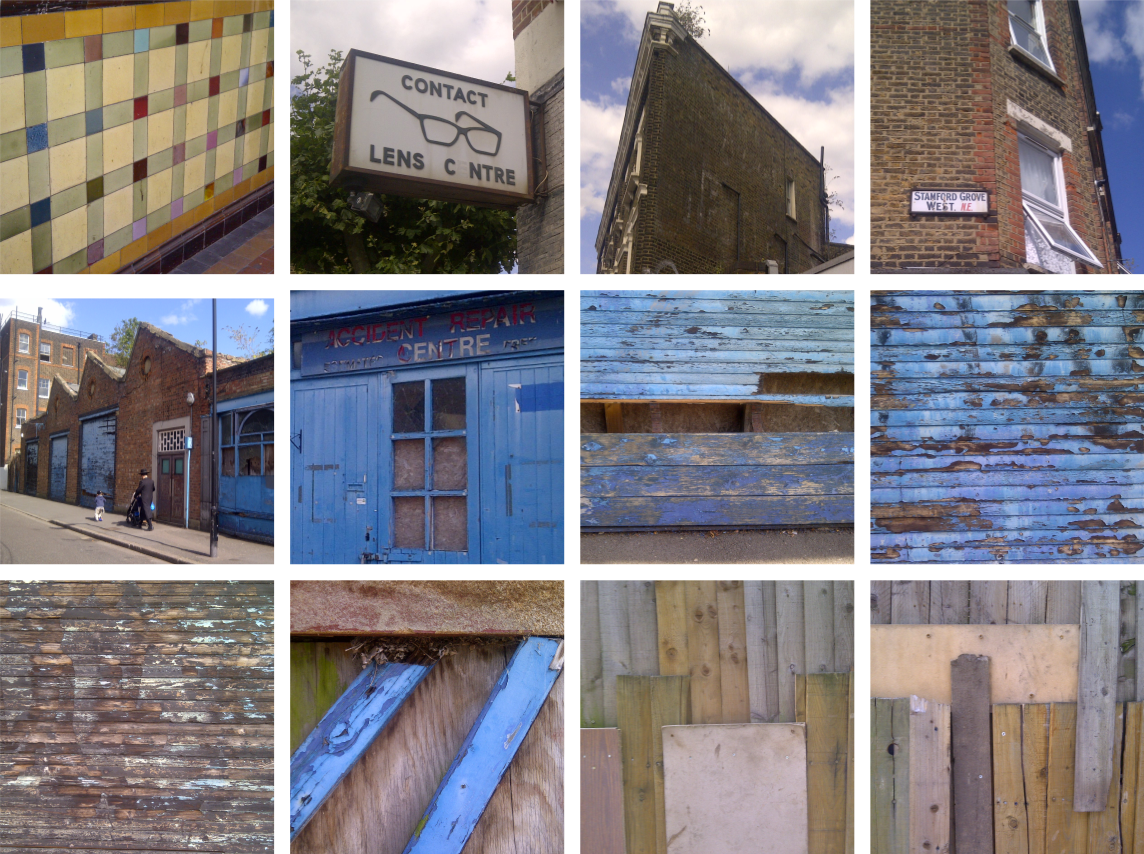 I have for many years been trying to get a good angle on the ghost sign above Clapton Station to try to work out what it might have advertised. Well, whoopee, I think I have finally cracked it – it appears to be a Nestlé ad, and may have looked like this one except the lettering on the Clapton sign looks to be be outlined rather than solid. Sorry, but the pic above doesn't really capture very well what I could see on the day.
I continued towards Stamford Hill, noticing that by now almost 75% of people passing me were wearing wigs, big black hats or thick tights. None of them were wearing a smile. I tried smiling at them but they ignored me as if I wasn't there. A lot of them looked thin, pale and undernourished; others looked far to young to have three children in tow.
At Clapton Common I turned left into Oldhill Street. It's interesting to note that there are lots of hills in the road names around here; Stamford Hill, Spring Hill, Big Hill, High Hill, Harrington Hill, Bakers Hill.
Oldhilll Road contains some very strange diddy little houses – there are two skinny buildings facing the street as per normal, but a few doors further up there are some more that are set sideways like back-to-backs. I have never seen these in London before. See here. And further along the road I noticed that Stamford West Grove still has its old framed enamel street sign showing the now defunct London N.E. area. These days NE is Newcastle. The South London S code was also abolished in the 19th century.
Returning back to the main road via Braydon Road I spotted an old workshop with broken windows and peeling paint with a sign that read, "Accident Repair Centre". Quite ironic really. The faded blue paint on the shutters was pleasing. That same blue again.
I walked back to the corner of Oldhill in front of the impressive 19th century houses that face the common and mused how similar it looked to other park-facing terraces elsewhere in London i.e Highbury Fields, Clapham etc.
On an information board outside St Thomas's Church, on the corner of Oldhill, there are some old photos showing how the area used to look 100 years ago. One of them features the Swan Tavern. I used to drink there in the 80's with a friend who lived close by – it was the only decent pub in the area. As you can see by these pictures, the building has changed considerably over the years. It's now a Jewish centre and barely recognisable as an old pub. It's been even further 'simplified' since the image in the link above – the front of the building is now practically flat and I could see that the interior has been plasterboarded and magnolia'd with bright strip lights added to the ceilings. Why they couldn't have kept some of the decoration and mouldings is beyond me. At least the church who took over the Rainbow/Astoria at Finsbury Park had the decency to keep the architectural details there intact. Hallelujah.
Anyway... continuing my journey...
I stopped to snap some mish-mash patchwork wooden hoardings on another building site and then spotted an interesting church spire in a street beyond the northern side of the road so I went to check it out.
Sitting next door to the Arriva bus garage in Rockwood Road is a Grade II listed building orginally built by the Agapemonites cult in the 19th century as 'The Church of the Arc Of The Covenant'. Read more about this quite-frankly bonkers group and its loony leader here. The building is covered in intriguing sculptures featuring among other things depictions of various beasts appearing to crush humans underfoot.

There are also some and some interesting bronzes up high. The building is now used by the Georgian Orthodox community. Here's a video about it.
On the opposite side of the road there is the New Synagogue which also has some lovely stained glass windows.
I thought that was enough for one day so I got on a 254 bus and went home.