The changing face of Tottenham Lane

The Broadway and Clock Tower area still has a few hints here and there of it's Edwardian hey day (actually, that's a thought: is it busier/ more popular now?!) and at some point soon I need to put together another Crouch End collection.
I was out for a walk last weekend when I spotted a pair of shops signs I hadn't seen before just north of Crouch End Broadway. They've probably been visible for a while, but I hadn't been in that stretch of Tottenham Lane for more than a year.
The signs show how the shop used to be split into two complete with lovely signs and panelled bubble-glass windows. I am really pleased to see that the latest owners have seen fit to leave these lovely old examples of hand-lettering on show, although those spot lights did rather ruin the composition of my photographs(!). We can now see that there was Margaretta, a high class dress maker at No.46a, and Rickard's shoe repairs at No.40.
I continued my walk north along Tottenham Lane towards Hornsey Station. On the right hand side of the road I stopped to take a snap of Broad Lane (pic 2). It's an evocative little thoroughfare but not that broad at all. But probably back in the day everywhere else was just footpaths and alleys? Or did broads hang out there (!).
Close by is a doorway that retains an element of Edwardian wooden door structure and some floor tiles (pic 3), albeit partially obscured where the wall has been moved perpendicular to the street at some point. The hardware shop further along shows how the doorway used to look, complete with curved entrance and tessellated tiles (pic 4, image squished vertically to fit box!). 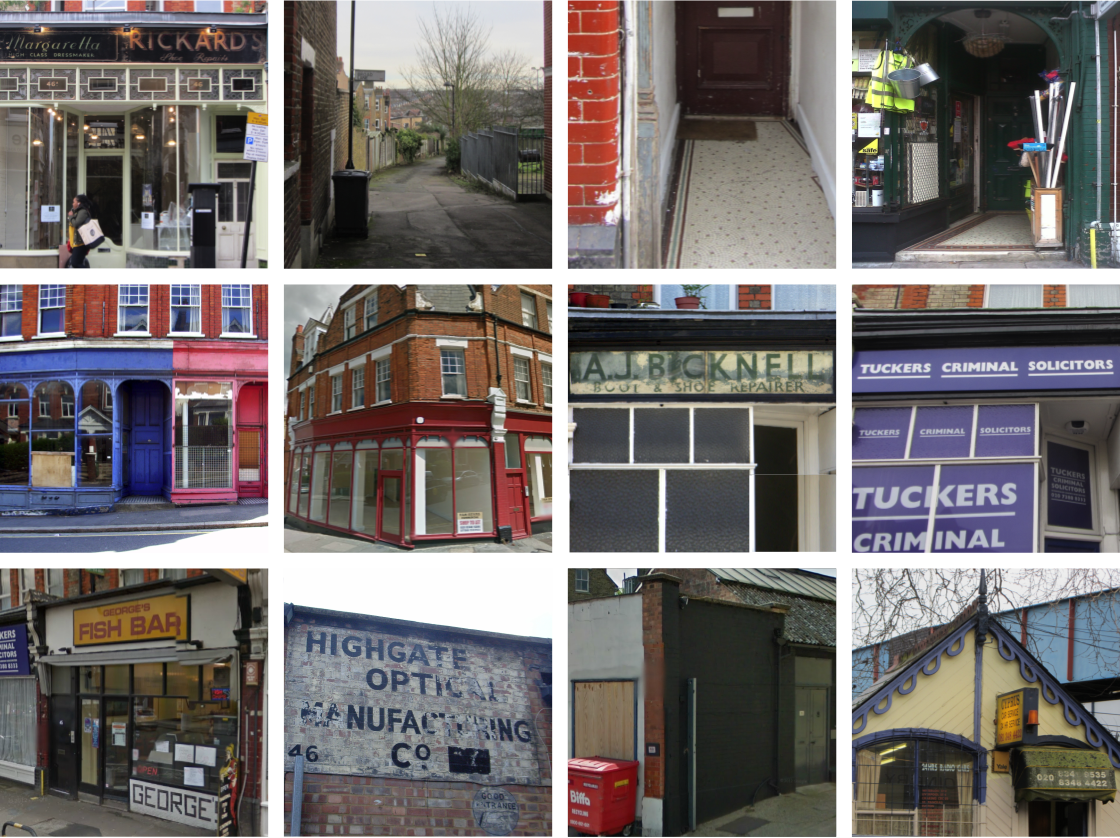 The pics on the middle row show some changing facsias. Back in June 2008 the curved row of shops at the junction of Tottenham Lane and Church Lane had been emptied out. Pic 5 shows how the arched Edwardian shop fronts on Church Lane where more or less intact at that point. Pic 6 is a google streetview pic which shows how the two doorways along that side have been removed to, I assume, create a larger space for rent. As I write this the space is still empty. See the full 2008 image here and the rest of the terrace to the right.
But I am more upset about the loss of the old sign for A. J. Bicknell, boot & shoe repairer, which used to sit facing/adjacent to the curved terrace at No. 43 (pic 7). As you can see by pic 8, taken last week, it has been covered up by Tuckers CRIMINAL solicitors. Oh the irony. I am hoping that it's still under because the new sign looks to be quite thick. And, what would be the point in destroying the old one? But hey, stranger, more annoying things have happened – see here.
Next door is George's Fish Bar (pic 9) which has an interesting interior. I will be writing about that in a subsequent post.
The hand-painted sign for Highgate Optical Manufacturing Co., along with its lovely little manicule pointing towards the goods entrance, has also bitten the dust. Pic 11 is a snap from google streetview which shows the wall has been given a lick of paint (the wall has since been painted white).
So now I am keeping my eye on that cute little hut directly over the road currently used by Cyrpus Car Service. I suspect this originally used to be a shop or kiosk connected to Hornsey Station. A new awning wouldn't go amiss there!
As usual... watch this space...