There is a programme on TV at the moment called Splash!
Tom Daley, the UK's Olympic medal-winning diver, has been busy training up fifteen celebs with vary degrees of success.
What I cannot understand is why this is getting criticised so much. It's perfect prime-time Saturday night fare... gawping at people who are wearing almost nothing scaring themselves half to death before hurling themselves off a concrete platform without hurting themselves. Rather them than me.
So it seems it's OK for celebs to dance, sing (and opera sing), be themselves*, climb mountains, ice skate and take part in Mr & Mrs, but not right for them to have a go at something really quite difficult and properly sporty? All in the name of entertainment. And with proper training advice from Tom and the panel of judges which includes Jo Brand as an obvious comedy foil.
Apart from Vernon Kay's gurning face, the only bits I don't like are the musical interludes with over enthusiastic dancers and divers, and sometimes a bit of synchronised swimming thrown in too. Those girls might look daft, but they are super-fit. I know that from personal experience because I have watched them from the comfort of my sofa.
I think the media is upset about Splash! because perhaps they think our Tom can be seen to be belittling or diregarding his Olympic status by taking part in such a show. Perhaps they are worried he might be as embarrassing as Victoria Pendleton on Strictly Come Dancing? There, there love.
Well I think it's good and I want Linda Barker to win. And if Splash! gets some fat kids off their arses and into the swimming pools, that's a good thing. Though not all at once mind, because that would cause too much water displacement.
Here are some London diving and swimming related images from my wanders around London. Check out the three panels on the middle row showing two shifty skinny dippers in Westminster. Ooer! 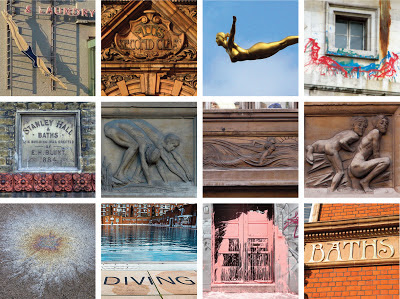 *A ref to Celebrity Big Brother. This latest series is highly amusing. I have been half-watching here and there... Speidi (Heidi and Spencer, who for those of you who don't know, count as one person on this show) are 'proper' reality stars from the US (go figure!). They have been playing it as a game, making up stories etc, lying and cheating in order to confuse the others and they have also stated that they want to win. And that they have no interest keeping in touch after the show. How refreshing. The others in the house don't like it one bit and are banging on about how 'real' they, themselves, are whilst preening their hair and sucking their cheeks in, yet being devoid of any thoughts, ideas or personality except to gossip and backbite. They are all awful. It's roadcrash TV of the best kind.
The gossipers ought to admit that they would at least like to win or, better still, be honest/real and say "I am here on CBB to improve my profile/ratings". To say it's just for the experience and how you want to be seen as a 'real' person is a big fat lie. Getting all upset about nominating is potty too as it's the most important part of the bloody show/game. And then there's the nonsense about letters from home, which all say the same thing anyway; "we miss you blah blah blah". It's not like they are going to contain anything juicy, personal or revealing such as "I have left you for someone else", "our daughter is gay" or "the dog just died".
Anyway, how can you be real in a house full of cameras? How on earth do these people cope in the outside world?.