That man in Notting Hill

I am really pleased that after a fair bit of cajoling from me that Malcolm took my advice, set up his blog, and has been posting quite frequently.
Being perhaps his biggest fan (that's just to embarrass him!) I reasoned that other people should also get to read his friendly, and often amusing, streams of consciousness about his observations on stuff that goes on in and around London.
My only criticism is that I think he ought to include more of his lovely pictures into the posts... after all he has thousands to choose from.
Malcolm lives in Notting Hill. I was over that way last month and, when in Moscow Road looking south, I took a photo of a mythological beast on a rooftop in the distance. So far, Malcolm has tried in vain to identify where it might be. It's the image top left... has anyone else got any ideas what building it's on? 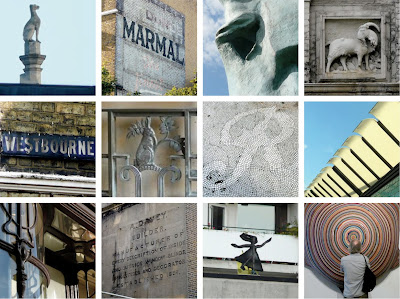 Most of these pics are taken in and around W2 and W11. Those that aren't have tenuous links to Malcolm; he is a goat and a rabbit (I am a tiger and a lion) and he liked Joanna Vasconcelos's Big Booby at the wonderful space The Haunch of Venison Gallery are occupying at the moment at the back of the Royal Academy in Burlington Gardens. Her show was really good.