The Isle Of Dogs and Canary Wharf...

My scavenger hunts along the Thames beaches led me recently to the Isle of Dogs.
When I first got there I was thinking that I should write a jolly blog post about it's possible to spend a lovely afternoon in the sunshine on the beach without leaving London*. At one point I even bought an ice cream and looked at the view across the river. Nice.
But then I decided to walk all around the edge (coast?). I even ventured into the centre a few times. Sad to report that, as I suspected, nothing has improved in recent years. In fact it's getting worse. 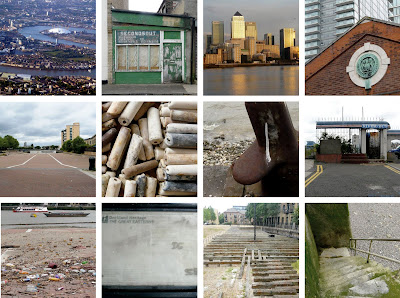 There are some lovely little cottages and houses at the southern end, which still retains a modicom of historical charm, but the lack of a real high street means everyone there is reliant on the nearby superstore (another bugbear of mine!).
But, as for the rest of it, there is barely anything in this modern dreamscape to indicate that this was once a bustling area packed with families working on and around the docks. Where once there were thriving communities, there are now charmless glass and metal tower blocks.
Yet here and there it has been decided to leave in place some random bits of decommissioned machinery or large chains but there are no signs or plaques to explain why they things are there or what they used to be used for.
The north side of east entrance to the West India Docks seems to have been neglected by the developers (so far). Sadly, where it could look really good, it looks instead like a wasteland; some cranes still remain (as per the ones on West india Quay), there are some rusty old barges, decaying wooden barriers, dilapidated buildings, fenced off areas etc. It's a huge contrast to the shiny tall buildings that loom over it.
The paths along the Thames are really disappointing; again, there is barely anything left to hint at what went before except a pathetic attempt at a couple of information boards about Millwall and the docks, and IKB's Great Eastern. But these are useless because the boards are so bleached out, sctratched and uncared for that they might as well not be there at all.
Looking across the river to the wharves along the Deptford waterfront the same rape of the past is happening there too. I find it all so sad.
And, finally, the privately-owned Canary Wharf Estate; I could write a long piece here about what I think of this charmless zone but "aaargh, is this really progress?" will have to do. I wonder if people who live and work there say to their friends "ooh, you must come and have a drink in this wonderful little place round the corner; it's been there for three whole years"!
If you do want to find out more about this area and its past go to the fabulous Museum of London Docklands.
*Just opened this week's Time Out and Michael Hodges has beaten me to the London beach thing as he's already written an article about it.