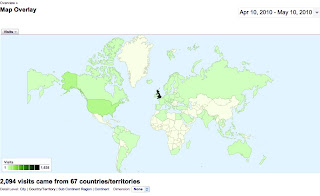 Last night I went to a Meetup. (Thinks: that would be a good pun title for a collection of butcher shop related images...!). For those of you who haven't heard of Meetups, they are a great way to meet up with like-minded people and make new friends.
So Joanna and I pitched up at the Theodore Bullfrog pub in John Adam Street expecting a social get together. To be honest, we hadn't really read up on what it was about in advance and expected a bit of networking (ech, I hate that word) and chats over a few beers. We'd just about bought our drinks when a lovely woman called Tamara started giving a talk about blogging and how to get the best out of it, illustrating it all with her top 10 of dos and don'ts.
I must admit at first I thought, oh gawd no, please get me out of here! But listening to her explain how her site has become massive, and I mean massive, in nine short months, I was really impressed. Tamara puts an awful lot of time and effort into her site and posts more than once a day. The woman is truly obsessed. Or as she puts it, 'addicted'.
She had lots of great tips about tagging and links and keeping up with trends and the news and knowing who your readers are and following up on things. Some of it was relevant to me, a lot of it wasn't. But it got me thinking.
So when I got in last night I checked my stats for this site (and Jane Made This). It's something I don't do that often because it's like entering a vortex and hours can fly by.
It's fascinating; it's absorbing. For instance, the map above shows the countries coloured in different shades of green indicating where my traffic comes from. A lot of the paler green countries are deceiving because it turns out on closer inspection that only one person may have accidentally clicked in and immediately hit the back button (as in the case of individuals in Madagasgar and Peru, and 5 people in Thailand who probably put words like 'cock' or 'body parts' into Google!).
But it's heartening to know that 1,638 people in the UK have looked at this in the past month, 1,143 of them in London alone, spending an average of 2.47 minutes on here each time.
And then there are people from further afield; someone in Moscow was on here for an impressive 10 mins.
Jane's London was 2 years old last week, so it's really nice to know that you are all out there and I am not sitting here writing to myself.
A big thanks to those of you who keep coming back, and hello to all my new readers...
;-) xxxxxx!