No Souls For Sale at Tate Modern

On Sunday May 16th I went to the No Souls For Sale event thingy at Tate Modern. They'd sectioned the floor of the Turbine Hall off into 70 spaces that were filled by a different gallery or organisation.
It was a mixed bag. There was a lot of stuff I couldn't be bothered to suss out, but there was also some interesting and thought provoking exhibits.
Most of the things that moved me came from abroad, from countries such as Italy or Vietnam... and now, looking at the NSFS site link (top line above) I am confused as to which site was for which gallery and I am kicking myself that I didn't make a better note of things as a lot of the posters in the link don't seem to tie up with the things I saw. Which is a shame. In fact some of the posters are better than the the exhibits I saw, and vice versa. 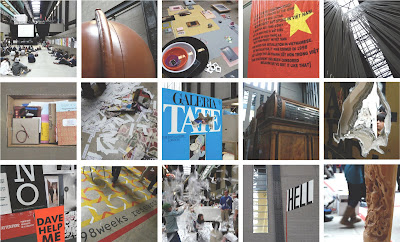 I really liked a stand in the middle that, on the outside, was made from old walnut furniture. And I loved the Buddah craved into a basbeall bat and the art books with contoured holes drilled into them. The square of white ribbons hanging from the ceiling was lovely, though I have no idea what it was meant to be about. In another area, children were having a great time throwing piles of little bits of paper with 'Local Artist' written on them up into the air. The big brown inflated globe that looked like a big Malteser was also strangely compelling.
Anyway... I took some photos.

Email ThisBlogThis!Share to TwitterShare to FacebookShare to Pinterest
Labels: art and artists, Tate