I am a friend of the Museum of London and last night I went to the private view of the new Galleries of Modern London in advance of the official opening (this Thursday 28th May).
It was all a bit too much as there is so much to see; it's all laid out and arranged so well. The interactive screens and 'touch tables' are really informative and impressive. 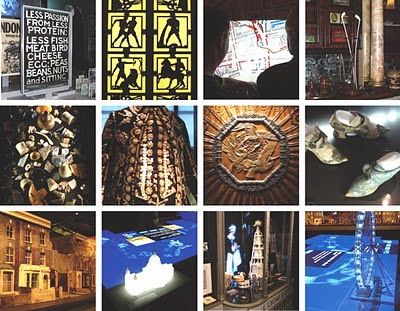 I especially liked a room papered with Booth's poverty map where you can zoom in on different areas on the screen at the rear, a long blue 'touch table' depicting the river where you can find out about today's Capital Concerns, a wonderfully ornate Selfridges lift dating from 1928, a replica Victorian street with a tobacconist containing some full length clay pipes, and the sign that bloke used to cart up and down Oxford Street.
Also good was the use of projected films showing actors as part of the exhibits as in the Pleasure Garden and the Lyons Tea House. In the main foyer there is a film showing London today on a large screen; airports, markets, city, houses, parks. I could have watched it for hours.
So, to sum up, it's brilliant, go and check it out when these galleries are open... it's free!!!!