I really should have put this on here weeks ago as the show finished on 21st June, but I just didn't have the time. I did try to tell friends that this year's degree show was jam-packed with good stuff and I hope some of you made it down there. A big thanks to my sister, who is just finishing her second year in stone and wood carving there (she's bloody good, by the way, so make a date for next year when it'll be her turn!) for telling me that the show was on and introducing me to so many of her lovely fellow students.
I bought a couple of things and one of them is hanging on my wall right now (top left by the wonderfully talented Stephanie Batiste). The other two I bought are by Alex Virji but I won't be getting them til August as he has a show on from tomorrow in Stoke Newington so, if you are in the area, why not go have a look.
I would have bought more if I had the money and walls that were big enough (Hatty). And I really enjoyed some of the installations, which don't normally interest or move me at all. So well done and good luck to everyone...
Here's a link to help identify some of the others artists shown below.
Oh, and two of the images shown below aren't art at all, just me taking arty pics. Can you spot them? 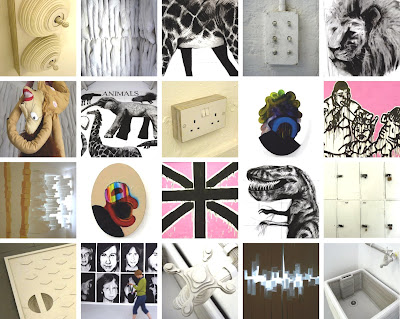 Email ThisBlogThis!Share to TwitterShare to FacebookShare to Pinterest
Labels: art and artists, exhibitions, galleries and museums