This week’s Time Out (No.2018) has a feature about DIY. It encourages us all, in these ‘tough’ times, to save a bit of money, get out the toolbox and fix things around our homes ourselves.
Home improvement by the homeowner, whether for repair or to keep up with the latest styles, isn’t a new thing by any means as we have been building, renovating and improving our own homes since we learned to stand up and walk and clean out the cave.
The phrase ‘do it yourself’ was coined in the 1950s and quickly abbreviated to DIY. The 50s was a boom time for DIY with the fad for modernism and clean lines. Since that decade we have been discovering and renovating the paneled doors and ornate fireplaces hidden by our granddads back when he thought it was a good idea to encase them in hardboard and cover everything with wood-chip wallpaper (also known as ingrain paper). I have today discovered, that the wood-chip process was invented way back in 1864 by a German pharmacist Hugo Erfurt but not used as wallpaper until the 1920s – well, well!
Even the Victorians weren’t averse to doing it for themselves – in one chapter of the brilliant* The Diary of a Nobody, which originally appeared in Punch in 1888, Mr Pooter gets busy with two tins of Pinkfords red enamel paint. He paints all sorts of things around the house such as flower-pots, a washstand, a chest of drawers and even the spines of his Shakespeare books. He then goes on to paint the bath with diastrous results.
Anyway, it occured to me that I have taken quite a few pictures of ghost signs that relate to this subject, either on the shops that sold items for the DIY enthusiast, or as advertisements for traders such as builders and decorators. A selection is shown below and, as usual, you can find them and more at Flickr. 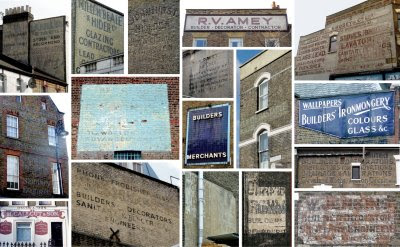 *when I say ‘brilliant’ I mean the original book, not the disappointing BBC4 adaption starring Hugh Bonneville.