Mudlarking with Thames21 at Broomhouse Dock 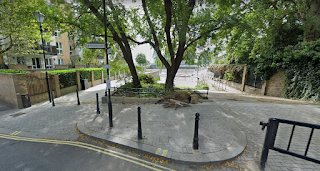 In my last post I mentioned I recently visited the foreshore at Broomhouse Dock, right (Google Streeview pic).

This event was an initiative created by Thames21 with the idea to get people involved with the river and local history. A few months before, I'd lead a similar event for Thames21 and Frames of Mind in North Woolwich, which was delightful success.

When the date was set for this Hammersmith location as Saturday 16th July, when the tide would be at its lowest between 11.30am and 1pm, we had no idea that it would end up being one of the hottest days on record. And here we were planning to be on the southern-most top of Hammersmith, on a beach, with no form of shade at all apart from the shadow made by The Hulingham Club's thin boat access ramp. 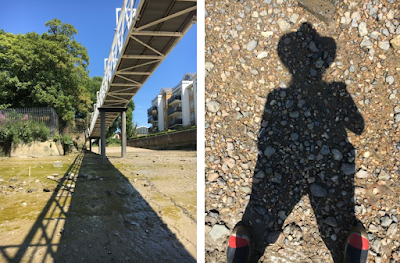 Nevertheless, behatted and fully dressed, with any visible area of skin slathered in factor50, I donned a pair of the provided wellies and some gloves, picked up a bucket and made my way down to the water's edge through what must be the muddiest, slimiest, gloopiest access slope I have ever had to use to get to a foreshore. Some of the Thames21 crew and volunteer helpers were busy doing a litter pic and I was saddened to see the vast amount of nasty wet wipes* they collected that morning. If you'd like to join these clean-ups find out more at Thames21.

The pic below shows the marvellous view across to Wandsworth's recycling plant, but today there is no ferry boat at Broomhouse Dock to take us to the south side as there would have been +200 years ago. 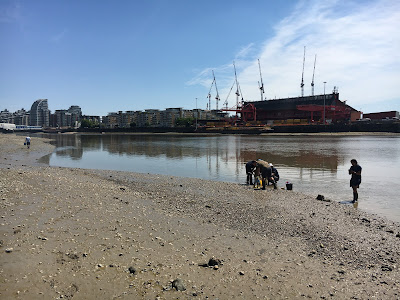 About twelve people of all ages came to join us on the day. We had hoped for more, indeed the cool box was well-stocked with plenty of ice lollies, but the hot weather was aagainst us. Once I'd moved the group to a cleaner part of the foreshore it was lovely to see how interested people were in the whole experience. It's the possiblitly of finding hidden treasure, I think. But it wasn't a good day for finds. We found old bits of metal in the form of nuts, bolts and nails, some small animal bones and some late 1990s electrical components(!) but I didn't see a single piece of broken clay pipe stem or any sherds of pottery worth sharing with the group. However, you could go back to that same location on another day and the shore could be completely different depending on the tide and recent weather conditions.

As I explained to everyone that day, when not with an organised group like this, in order to go mudlarking on the Thames foreshore, you need a licence, and these can be obtained from the PLA here. But there are restrictions as to what you can do even if you have a permit, such as you cannot start digging holes (you don't need to – just walk slowly and look carefully) and certain sections of foreshore are out of bounds.

In Broomhouse Lane at the corner of Daisy Lane, I noticed that the lovely building there is covered in scaffolding. Argh no, I thought. Oh phew – they are converting it into a care home, see here.

*People seem to think the word 'disposable' means it will decompose. Realistically, everything is 'disposable' whether it's a car or an apple core. In this instance, 'disposable' tends to intimate that the product is for single use – just use it and throw it away, ta da!  Victorian era magazines were full of ads for disposable items, but the products back then were made of glass, paper and other components that were easy to separate and repurpose. Our plastics, especially since the 1950s, not so. Products such as wet wipes weren't on the shelves a few decades ago yet mothers the world over managed to cope ably. So, if these things are evil waste, literally clogging up the planet, why aren't they simply removed from sale? Why are companies still being allowed to manufacture them? And note, they are packaged within mostly non-recyclable plastic. Don't worry though, the children of the future will fix all this.