Following a trail of bloody footprints between N19 and N4

Early this morning I made the effort to get out for a walk and back home again before it got too hot out there. I was doing well, having been up to Hornsey Rise and over to the Archway station area, then into Aldi for some groceries and by 9.30 I was walking back hown headed down Holloway Road laden with two bags of shopping. Halfway down the hill the blazing sun was in my face so I turned left into Alexander Rd, N19, to make use of the shady south side of that street. 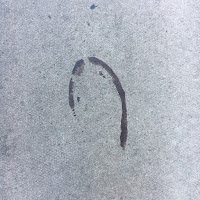 Looking up, down and around me, like I do, because there are always new things to see, I noticed a curved brown mark on the pavement that was clearly the outline of the front part of a shoe or trainer. And then I saw another, and another, and many more. This clearly had been made by someone with a bloody wound in their right leg who had been heading in the direction I’d just come from, towards Holloway Rd.
Hmm. How intriguing.
Where was this person going? Where had they come from? And what had happened to cause this loss of blood?
I decided to follow the trail to find the source of the incident. 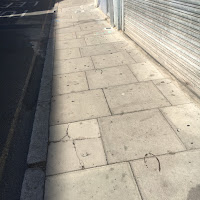 This took me across Cornwallis Rd to the end of Alexander Rd where it meets Sussex Way, then right into Tollington Way Second pic shows view looking east), then over Hornsey Road (but sort of diagonally, not using the crossings) to Tollington Park where, by the pillar box, I noticed that these earlier prints are surrounded by lots of little blood splatters which I guess were caused by the impact each time the foot hit the pavement. Oh my god, this person was losing a lot of blood. I also think, judging my the gaps between the prints, that he was  running.
My shopping bags were starting to cut into my fingers but I was hooked, intrigued.
The trail continues along the south side of Tollington Park and it occurred to me, seeing as we haven't experienced any rain for weeks now, that these bloody marks that appear relatively fresh, dare I say shiny, could have been made weeks ago. There was a road sweeper so I asked him how long he'd known about them but he told me he’d only just started working in this area today as he was covering for someone else.
We had a jolly chat about sleuthing and how it made me feel like an excited 8yr old finding hidden treasure, mysterious marks and secret spaces that nobody else knew about (they did, but they never said so!). I also recalled back in the '70s when, in the middle of the night, our dog Toby barked ferociously at the back door. We flew downstairs to see what was wrong but saw nothing to concern us and assumed it was a cat out there. When we looked again the next morning we found someone had left bloody footprints down the full length of our garden and, on the paved area by the back door, a semi-circular spray of reddish brown which must've been when he span round as Toby hurled himself at the window. The fella's tracks then went half-way back up the garden where he'd climbed over fence into next door's garden and exited into the street by their sideway, ending with a large bloody mess outside the school where, we deduced, he must've got into a car. I remember enjoying the sleuthing process. And here I was this morning repeating the process. The road sweeper likened me to  Miss Marple and I wondered if I should have told him about my Agatha Christie walks and talks. 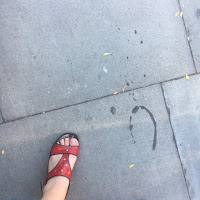 I continued along Tollington Park and found that the marks crossed the road and then crossed back again to continue down the southern half of Stroud Green Rd. Well, what I mean is, this is where the guy had come from. At this point I decided it was getting way too hot to be  out sleuthing, especially whilst carrying heavy bags, and I and came home and wrote this.
I am guessing that some kind of horrible altercation happened near Finsbury Park station, or in the park itself, and the wounded guy fled to the Upper Holloway area. He may have been heading home, or perhaps he was going to Whittington Hospital?

I can't help myself, I really do need to find out more. Later this evening or sometime over the weekend before the much-needed rain arrives, I will follow the trail in both directions to see where they start and end.

Update 1: Saturday 13th August.
I went back to Alexander Road this morning to follow the trail to its end and there I noticed that the splatter marks are far greater than I’d observed in earlier parts of the roue, such as in Tollington Park. Stands to reason really. I also paced it out and, even though I take fairly long strides myself, I am pretty sure by the length of the gaps that the wounded fella was running (I am still assuming a male). 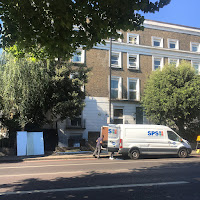 At Holloway Rd he turned right. On reaching The Crown PH he crossed over to the other side of the road. The tracks stop outside No.517/519. I couldn’t venture into those gardens because it is private property and some men were hindering my sleuthing as they went in and out to those properties installing protective metal panels on the windows and doors. I asked one of them why and he said it was due to squatters, druggies and anti-social behaviour. Ah. 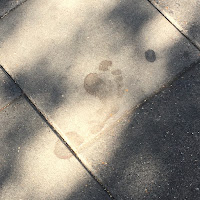 Having looked further along the pavement there in both directions, between Wedmore Rd and Tavistock Terrace, I found no more bloody shoeprints. But outside No. 517, near the back door of the SPS van shown above, there are a couple of naked footprints that also might be bloodstains. Whether these were made by the same guy, I don’t know.
Update 2: Sunday 14th August
OK, I’ve worked out where it started…
Every Sunday there’s a Farmer’s Market in the playground of Stroud Green School, N4, here at the junction where Perth Rd meets Ennis Rd opposite The Faltering Fallback public house. I wonder how many of the people there today sipping their Fairtrade coffee, buying their organic veg and Italian wines, enquiring about the vegan cheese, etc, have noticed the very clear bloody prints that run around the school, let alone are aware of any trouble in the area recently?
I have deduced that whatever happened to cause the loss of blood occurred on the pavement near the school’s main gates at the other side of the building on Woodstock Rd because there I found prints of varying strength in pointing this way and that. The wounded guy looks to have at first headed south towards Finsbury Park Station and then changed his mind at the end of the school fence and decided to turn round and head in the opposite direction because, bwteen there and the scholl gate there are two clear trails heading in each direction. Then clear, now very bloody, marks continue along the pavement around the school, over Ennis Rd, past the pub where he ran along the double yellow lines and then into the middle of the road before crossing over to the pavement on the east side of Stroud Green Rd.
And then it's as I have written above... he turned westward nto Tollington Park, crossing to the north side diagonally at Charteris/ReginaRd before crossing back again at the next junction, Evershot/FonthillRd. Then he went all the way to the end of Tollington Park, diagonally over Hornsey Road into Tollington Way, north/right into Sussex Way, left into Alexander Road, then over Holloway Roadd, to what I’m guessing was home.
I've tried googling to see if this has been reported online but, even though I’ve found a couple of other incidents in the area these past few years, there’s nothing on this. I will send a tweet to Stroud Green Police and report back here if anything comes back from them.