The Parson's Green ghostsign – let's go to the Palace!

Way back in the dim distant past, in November 2008 (wow and ouch, that's almost 15 years ago!) I took some photos of a huge hand-painted sign on the side of Woolverstone House, 45-47 Parsons Green Lane. The sign is painted on the rear of what was originally a beer retailer/ publichhouse and faces north across the District Line railway on the other side of the road to the station. In 2008 the sign looked like this: 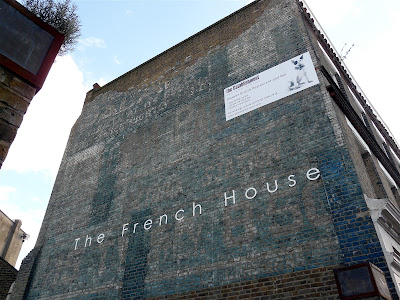 It was faily easy to decipher most of the words (see further down). I filed the pics, intending to return to the site another day when the light was better for photography. 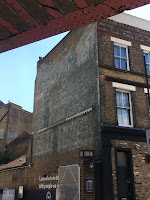 But this area of Fulham sits in an area I rarely pass through, let alone stop, and it wasn't until a few weeks ago that I finally paid another visit to the sign. I was at last in the vicinity because I had been asked to lead a mudlarking group on the foreshore at nearby Broomhouse Dock. As I came out of Parson's Green station (possessive apostrophe there or not? I wish they'd make up their mind!) I crossed the street to check on my old friend and was delighted to find it's all still there, in fact more of it is visible than before being as that white panel is no longer in place. I had expected the whole wall to have been overpainted in some way or completely whitewashed, but I was pleased to see it intact. This was about 11:20am on a very sunny, hot and hazy day, and not anywhere close to the best conditions for photography. Hence why the best shot is this one taken from underneath the railway lines.

The sign is an advertisement for variety nights at The Victoria Palace Theatre, the Grade II* 1911 Frank Matcham building topped by a gilded statue of Anna Pavlova.

I have returned to my first batch of pics and created this over-enhanced image to better illustrate the content.What is immediately evident by the patchwork effect here, is the amount of different panels that have covered this wall throughout the decades and, as such, helped to protect what still exists. 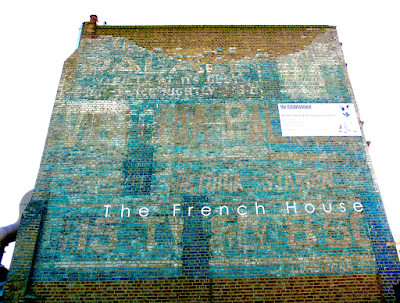 Top left, within a panel across 2/3rds of the wall:
VICTORIA
PALACE
VARIETY AT ITS BEST
(time) TWICE NIGHTLY (time

I think what we have here is a build up of signs over time with the earliest one at the top left, its letterform is distinctly early C20th. It reminds me of the sign for the Palais de Danse that used to be visible from the Dictrict Line plaforms at Hammersmith until that marvellous music venue was demolished in May 2012. 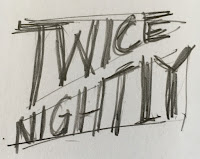 The repetition of the venue name at centre looks to be later addition, rendered as it is in a simpler sans serif form. And at the very bottom, partly obscured by that vertical dark stripe, is a delightful interconnection of 'Twice' and 'Nightly' where the two words are set diagonally against each other as per my pencilled example, right.

And finally, at the extreme bottom right, under the rule, it reads LONGMANS – this is probably the signwriter and, if so, could be the largest 'signature' I have ever seen on a hand-painted sign, the letters being three bricks high! There looks like there might be some other smaller letterforms to the right of that name and this could have been a telephone number, but being as the mortar between the bricks has been replaced across the whole wall, this is very hard to discern now.

Does anyone have any better pics?