This might be the best hidden-in-plain-sight ghostsign in central London.

I have been busy pulling together some online talks about old defunct and faded signage of all kinds in central London, specifically Soho, Covent Garden and Fitzrovia. This has involved revisiting and updating my 'show and tell' folder and the accompanying notes for the central London walking tour I have been leading for the past three and a half years. 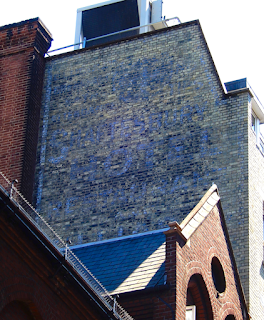 When I first devised that route from Long Acre to Rupert Street, a friend and I test-walked it one sunny winter's day in Jan 2018. As we used the zebra crossing on Shaftesbury Avenue, heading from Seven Dials to St Giles Church, we turned to look back up Mercers Street just in case we'd missed anything and were amazed to spot a sign that neither of us in all our decades of wandering about armed with cameras had never noticed before. Way up high, facing north, there is a hand-painted sign on the back of what is now The Mercer Street Hotel.

Had it been covered and made a sudden appearance? Doubtful. We think we'd simply missed it due to the tree on the corner of Mercer Street than when in leaf as good as obliterates the sign completely for most of the year. Also, the sign is only visible from a couple of specific spots along that junction. Blink as you walk past Mercers Street and you'll miss it. See Google streetview here.

I returned to the site a few weeks later and did my best to take some photos. And I've tried again a few times since. It's difficult to get a decent view of it, because the weather, the angle of opportunity and the faded blue/white letters obscured by what looks like layers of black soot all play their part. I'm really glad that I have returned to all this because I was convinced that I had added this discovery to this site ages ago, but no, it turns out it was still lurking in my 'To Do' folder as a simple note to self.

This is what I have found out so far...

The Shaftesbury Hotel was constructed on a site that previously George Russell's rope and twine business at 47 Great St Andrews Street (later to be renamed Monmouth Street – you'll see refs to these old street names on the road signs in the area). Images of Seven Dials, dated 1910, show the hotel covering the site of nos. 43-47, and this is corroborated by the gap in the directory for that year, hinting that the building was nearing completion. I think we can assume that the sign was painted onto the rear of the building during or shortly after construction, intended to be clearly seen by traffic coming down St Giles High Street from the junction of Tottenham Court Rd station when buildings in the vicinity were much lower than they are today. This hotel was probably at that time one of the tallest in this area. 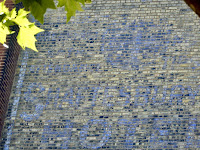 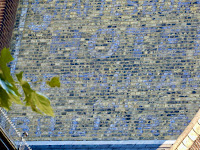 It would have been an unusual move to open a hotel here, albeit a cheap/budget one, in a district that had previously been tainted during the Georgian era as being inhabited by thieves and prostitutes, a stone's throw from the rookeries of St Giles as depicted by Hogarth in Gin Lane. But by the 1880s the street of the Seven Dials had evolved to become merely an area where the working classes lived and worked, with a thriving street market. A clever entrepreneuer must have seen the value of the central location as we do today.

I have done my best to decipher the wording on sign. I've boosted the pics using Photoshop (not shown here) but instead included a hand-drawn version to make it easier to understand. The consensus is that BEDROOM is the word at the very top (where I have intimated something above BREAKFAST). On close inspection, a B and two OOs are visible. The big 4 looks to have been in a circle and was probably 4/- (four shillings) per night for a room, which equates to about £25 today. Wow! 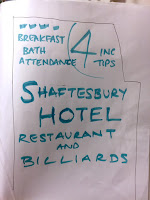 Billiards was very popular in the late Victorian era, especially within Temperance Halls, and I wonder if this was constructed as a Temperance Hotel being as the designof the building is similar to some others that were constructed in that era, such as The Kenilworth in Gt Russell Street near the British Museum, where activites and good food would have been an attraction rather than alcohol. Note that a bar/drinks lounge is 'missing' from the list of facilities offered on this painted sign. The 1915 directory sheds no light on this idea and simply shows it as Shaftesbury Hotel, Thos. Gordon (London) Ltd., at 44, Great St Andrew Street. 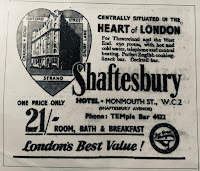 I also found this ad for the hotel in a 1953 guide book to London. As you can see, it is advertising the hotel's prime location as close to Theatreland and the West End. The price still equates to about £25. You'll be hard-pushed to find a warm cupboard for rent at that price today!

An online search throws up no additional info or photos, indicating that no one else has spotted this corker of a ghost sign either. Ooh I feel like a treasure hunter who found gold!

One of London's best hiding-in-plain-view ghostsigns, I'm sure you'll agree. 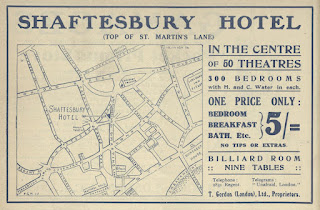 UPDATE 20th May 2022 – Sam and Roy @ghostsigns have finally caught up with me about this(!!) – they posted this 1917 ad on Twitter which backs up the wording on the painted sign and also shows T. Gordon (London) Ltd. as proprietors, suggesting the company also managed other hotels/properties across the country. Something to look into another day.

I am still intrigued about the two lines under BILLARDS which are not visible from the street... Can anyone give me access to the roof of the Odeon, Shaftesbury Ave?!