I was in Shoreditch recently, wandering about admiring things, planning walking routes and generally enjoying the Winter sunshine. I decided, as I was close by, to go and visit an old friend, the hand-painted sign for Bloom’s pianos on the north side of the block that overlooks the front garden of The Museum of The Home. 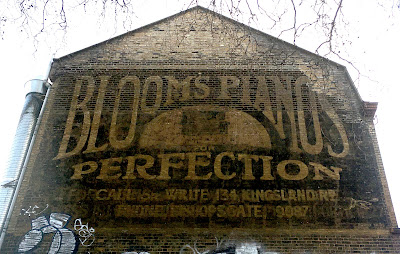 I stood there deciphering what I could see, making notes. When I got home, I tried to find out more info about its content, but what I did find was scant and posed more questions, and so began days of bloomin' research (see what I did there?!) to try and work out if this signage is from the 1910s or 1930s

This large hand-painted sign looks to be from the approximate Edwardian era as regards the letterform with those blobby serifs, undulating cross bars on the E and F, that lovely kick on the R, the curves, arcs and stretches and, of course, there's that upright piano at the centre. Also, there are direct telephone numbers shown here – exchanges of this kind did not become available until 1912, though I cannot, as yet, ascertain who the Bishopsgate 9087 number belonged to. And, despite the directional at bottom right in the form of a manicule pointing to the front of the bulding, I can find no ref of any Blooms listed along this terrace in the 1910s. Though they make an appearance in the 1930s. Read on...

134 Kingsland Rd is the address of the whole block from the museum to Cremer Street and comprises seven premises A-G. If this sign is from the 1910s then it's likely that this excellent advertising space, facing the traffic coming into London from the north, was simply used to advertise products made at nearby workshops, the sign being commissioned by an enterprising family of cabinet makers who made cases for pianofortes and had connections to someone in this block who could accept correspondence on their behalf. This might well have been William Richard Mitchell, shopfitter, who was at D&E in 1914, or Clarke & Greenfield, glass mould makers, at G. Indeed, in 1925 every one of these spaces is occupied by a company making or selling something to do with wooden furniture. 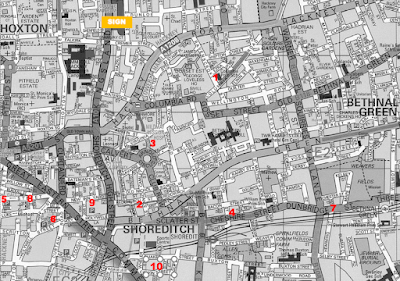 Bloom is a fairly common Jewish name and there have been many cabinet makers by this name living and working in the Bethnal Green and Shoreditch area. For instance, in 1899 there was Joseph Bloom at 54 Ravenscoft Street (1), a road that was mainly cabiinet makers at that time, and Nathan Bloom a short walk away at 29 Redchurch Street (2). Then, by 1910 Marks Bloom is at No.64 Ravenscroft St (1) and Joseph has moved into new premises at 5 Sunbury Works, Hocker St (3). To muddy the waters further, there was also Leckstein & Bloom in Cheshire Street (4) in 1910 with other workshops in Tabernacle Street (5) and Christina Street (6), and then in 1915 there’s Jacob Bloom in Dunbridge St (7) as well as Israel Bloom in Leonard Street (8) and Barnett Bloom in New Inn Yard (9). I have no idea if they were all related, but it's very possible. 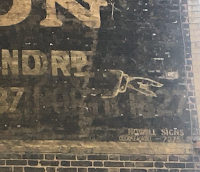 Phew! So I’m thinking this sign could be just pre-WW1 which is backed up by the signwriter’s name, written in small ‘one stoke’ at the bottom right corner: Howell Signs, Clerkenwell – 7275. John Thomas Howell, illuminated signs, was at 2 Vineyard Mews, just off Farringdon Road, in 1910, but he’s gone from there by 1914 and I can find no evidence thus far of him having that Clerkenwell phone number at that time.

It is interesting that Howell was not local to Bethnal Green, E2, and I wonder if JTH might have been a friend or work associate of the Bloom family because I notice that Mozart & Co organ builders were at 32 Vineyard Gdns from at least 1895-1910, so it's possible that the music maker connects them all, such that Mozart's mechanics might have been housed inside cabinets made by Bloom.

The Clerkenwell 7275 phone number makes an appearance in the 1923-25 directories when Lionel Victor Howell (JT's brother or son?) is listed at 10 Penton Place, Islington (Angel area but classed then as part of Clerkenwell) and the phone number is carried to larger premises in the 1930s, just around the corner at what is now 91-99 Pentonville Road here.

Another idea (ooh, I am full of them!) could be that it was J.T.Howell who painted another similar-looking sign that includes an early C20th illustration, for Daniel Leakin’s valet and car hire service at 19 Wellington Row which is on the corner of Ravenscroft Street, coincidentally a couple of minutes' walk  from a Bloom workshop in that street. It's very likely that, just like the Bloom's sign in Kingsland Road, this was inititially an advertising site used to advertise services that were available close by. This is a small cottage-style terraced corner house so it's very doubtful a fleet of vehicles etc could be kept here. Until 1915 (just after I've lost track of any signwriters by the name of Howell) this corner location is shown as John Bates, coal dealer, who I think lived there and used it as his office. The vehicle depicted looks to be a 1920's Ford Model T light commercial inproduction 1908-27. As far as I am aware Leakin does not make an appearance here until the 1930s. But I've gone off on one of my tangents here, so let's park Daniel Leakin and his interwar motor haulage company for now and get back to the Blooms.

As I have hinted in the subject line, there is actually a second sign here which starts further down, sort of halfway through the big letters. If you scroll back up to the top you'll notice that the lower two thirds are stronger in colour than the upper part. 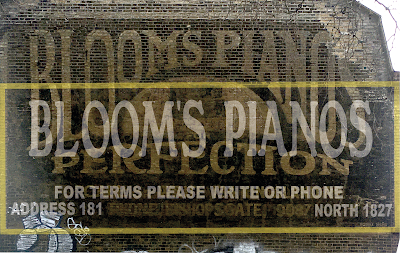 I have warped and stretched my original photo to better illustrate this. The tinted yellow box rule shows where the edges of this later sign are visible and in white I've added the letters I can ascertain thus far (though I have guessed the word 'please' at the centre).

At the bottom right there is a different telephone number from the earlier Bishopsgate one. This is confusing because, in 1939, this NORTH 1827 number belonged to George William Every & Sons, gear cutters of 49 Thornhill Road, N1. This address in Barnsbury, Islington, and a short walk from the Blooms outlets in Cally Road. The Everys were in Barnsbury for at least 30 years – in 1910 they are listed as ‘clock wheel makers’ and were probably at that time supplying the Clerkenwell clock-making area. But the question here is, why on earth would Blooms be using Every's phone number? Hmm, ponder ponder... perhaps, again, this was merely for correspondence address rather than a place to buy, though that does seem rather odd in this instance considering the size of the shops on Cally Rd.

I then considered the number 181 at the bottom left corner and which road in the area might this apply to – my hunch being that it must be one of the shopping streets in that area. I quickly found Blooms House Furnishers (Isaac Bloom) at 181 and 187 Caledonian Road in 1939 as well as opposite at No.198. So the missing/hard to decipher part in the centre of the last line here must say Caledonian Road (I have been told that it says 'ISLINGTON' somewhere under there).

Back to Kingsland Road... In 1930, Bloom Bros cabinet makers is/are at 134 C, D & E, but they've gone from that location by 1940. I suspect this might coincide with the opening of the outlets in Caledonian Road, the Kings Cross area probably being better for transport and distribution, and also closer to the many piano and organ makers in north London, specifically in Islington and Camden, north of the canal.

The 1939 directory also shows that Nathan Bloom was still busy at his workshop at 29 Redchurch Street (1) and by this time had also taken on additional premises at 19-21. There’s also H&L Bloom listed at 3 Fountain Street which backs onto Sunbury Works (3) which surely must be the same family seeing as this was where Joseph was listed two decades previously. By this time there's also J. Bloom at 24A Calvin Street (10), an attractive terrace of workshops which still looks good today.

As regards the design of the ads, note that the smaller/later advertisement has no illustration. OK, so there was less space, and the inclusion of an illustration was probably expensive, but perhaps pianos, even the ones in beautifully-made wooden cabinets, were not as much of a selling point by the time this was painted, especially with domestic gramophone players becoming more affordable.

But I do have a good idea why the newer sign is less tall... if you study that end wall today, or look again at my pics above, notice how the bricks at the Kingsland Rd side have been replaced – the uppermost front section of the wall has been rebuilt. It occurs to me that this might possibly have been damaged during WWI Zeppelin raids – the red line on this map clearly shows that two airships passed quite close to 134 Kingsland Road in May 1915. Alternatively, if it's a1930's sign that was later repainted, this could hint at it being repainted during or shortly after damage during WW2. The date of the second hinges on when the Blooms opened those premises in Cally Rd.  I'd love to see how the wall above the thinner sign would have appeared at the time it was created – perhaps the visible elements of the earlier sign at the top were overpainted in black.

I am still torn as regards the date/era of these advertisements. The available information is intriguingly inconclusive. The style is 1910s but the info within seems to be hinting at the 1930s which, to me, is at odds with the old fashioned letterform used. Perhaps they used a logotype in this fin-de-siecle style, hence why the letterform continued through the decades...?

I think I will stop now as I’m bloomin’ exhausted.

Watch this space for more updates, as I will amend the info above as and when I find out more. If you can help, please use the comments box below or contact me @janeslondon via social media

Thanks to Sam Roberts for some additional archive reference from 1920s and 1930s.