A couple of weeks ago I wrote about Fitzroy Square, particularly when I used to work at Gannaways/ArtIntegrators within No.4 in the late 1980s. I had intended for that piece to include some other places in the vicinity but as I started typing I started to recall many other things associated with the company and that particular post just got longer and longer.

Here I am returning to the area as a sort of part 2; the shops pubs and cafes that I used to frequent on this northern part if Fitzrovia during that same era. Today, wandering around the streets immediately adjacent to 4 Fitzroy Square, I can see quite a lot has changed, although at first glance it's not immediately obvious. On closer inspection, I can see that many pubs have been irrevocably ruined, many shops and cafés have changed and many businesses have gone, some having completely disappeared without a trace even though the building that used to house them still stands.

Back in the 1980s it was usual to go to the pub at lunchtimes, not just after work, whether to have meetings with workmates and/or clients or simply just for a bite and a pint. This being before the age of mobile phones it was relatively simple to find employees 'still out at lunch' by sending someone out to do a quick circuit of the local taverns. And we had a marvellous choice here. Exiting from the rear of 4 Fitzroy Square into the mews and turning right there was the Grafton Arms with its lovely upper room, evoking the days of Georgrian splendour. Today's website makes the whole place look a bit too sanitised and MDF pastiche for my liking. What is this obsession with 'boutique' – This isn't Carnabay Street ofr the Kings Road in the 1960s. I don't want to buy a Biba dress! 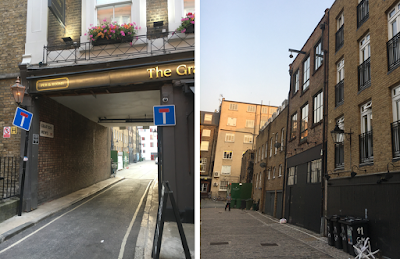 At the other end of the mews on the corner of Warren Street there used to be Rive Gauche, an excellent French café that had absolutely best cherry clafoutis I have ever tasted. They also served marvellous lunches accompanied by a short but good wine list. Today it's home to Little Nan's. 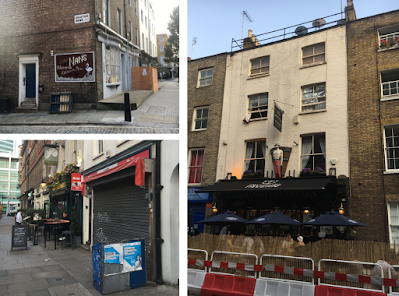 Heading eastwards along Warren St towards TottCt Rd you'll find The Prince of Wales Feathers public house almost oppostite the side exit of Warren Street tube station. In the 1980s this pub had the most amazing horsehoe-shaped bar. I recall even back then thinking how marvellous this was and how there weren't many pubs that still had a similar interior. Being just one shop wide it was a little cramped such that there was perhaps more space behind the couter than there was customer area, but I loved how conversations were held across the bar thus involving the staff. It was really inclusive. There was proper seating at the rear, like a snug. No surprises to find that the interior has been completely gutted (I know not when) and replaced with a long boring bar along the rear wall, with laminate flooring and homogenous furniture and fittings. They call it progress.

On the plus side, I am glad to see that Jai News, the family-run newsagent next door, is still going strong. I used to take my rolls of 35mm film into there for processing, this being the local Colorama collection point.

At the other/western end of Warren Street, on the left, just before Cleveland Street, there is the Smugglers Arms public house. Another absolute favourite of mine when working in this area in the late-80s. But today, the 'olde worlde' seaside exterior complete with its mini-smuggler-figurehead belies its boring ubiquitous interior. I recall dinstinctly c1990 taking a group of friends there a life drawing class nearby, telling them how this pub that was reasonably similar inside to The Crosse Keys in Endell St, Covent Gdn, that it was run by a family with a marvellous friendly dog, lovely atmosphere and hand-made doorstop sandwiches in a cabinet on the bar (thick slices of crusty bread packed with proper fillings such as ham salad, corned beef and pickles, cheese and coleslaw) ... the minute I stepped across the threshold, and noticed that the pub carpet had been replaced with something modern, a lump came to my throat and I looked up to see a renovation that as good as broke my heart. Deciding that I couldn't bear to go inside (I still haven't returned) I instead took the group to one of the other pubs adjacent to Gt Portland St station.

The Smugglers Arms was one many pubs to be stripped of any interest and history during the 1990s; something that was spreading like a disease, a plague, across the whole country at that time. The big breweries, having seen how well a pub was doing under indepenedent management, sought to cash in and many leases were not offered for renewal. Familes who had run a successful and popular business for decades now had no source of income and no homes. Gone in a flash was individuality and decades of layered history, and in came blandness and homogenisation. A particularly great loss during this time was the marvellous White Swan in Covent Garden; OK that pub is still there but since that transformation it has never regained the popularity of the 1980s*.

Another good thing – nearby in Warren Street, at the corner of Conway Street is the marvellous corner shop of  J. Evans, dairy with its gorgeous blue tiles and shop fascia, today an Italian deli. And opposite, a building of the 1930s with geometric pattern details, which is one of the stops on my Art Deco Fitzrovia tour.

Heading back to Fitzroy Square there is a building that really intrigues me. At 43 Fitzroy Street the house is painted or maintained to look like it is in a permanent state of decay. I say this because the five pics at the top here were taken in July 2021, yet the bottom row shows my pics of 2008. Bizarre huh. Look at those layers of painted history. And I am fascinated by the little lock-up shed in the basement area. Whatever the are owners are doing here, I just love it. 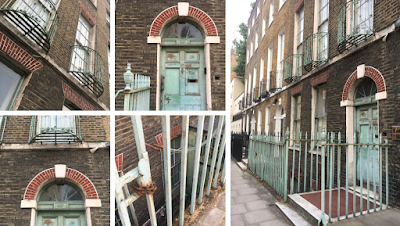 Writing this reminded me of other places long gone, yet fondly remembered, perhaps you can add to the list?:

The Adams Arms in Conway Street. This was another early loss in the early 1990s. Much missed and probably the favourite choice of the staff at No.4 Fitzroy Square. This 1742 building had a marvellous front bar, many Georgian and Victorian fittings, an enclosed conservatory area at the rear, and good friendly staff lead by jovial Colin the manager, also a bit-part actor/extra and often to be spotted in ads and videos of that era including Holly Johnson's Love Train where he appears both as a bridgegroom and a flag-waving guard.

Il Pappatore – an Italian restuarant that used to be in a 1970s development at 235 Euston Rd, where now sits the green and white University College Hospital. Although I continued to go there when working at Fitzroy Square, my best memory of the place is a few years earlier when I spent all day there from 10.30am until well gone midnight with Del, the account handler at Strata, just over the road at 22 Stephenson Way. I remember the pale pink on white tablecloths. This extra-long lunch was a treat for successfully managing and completing a job that our client was really pleased with. We had brunch, lunch, dinner, nibbles and alcoholic beverages of all kinds. Other staff from the company popped in to join us throughout the day. And, being as we both lived in the Romford area, it was just one cab ride home also part of the reward. We both showed up for work the next day at 9.30am. And probably went to a pub after work!

The Warren – a marvellous large wine bar underneath The Grafton Hotel, accessed via the alley at the side of Caffe Nero or from Whitfield Street. It was lovely down there. It was often the venue for leaving dos and birthday parties. I tried to take a friend there in the 1990s but found it had gone.

There were many excellent Indian restaurants to suit all pockets at this northern end of Whitfield Street. I particularly liked the ones that offered fab value help yourself vegetarian lunches. Of these restaurants, only Agra seems to remain. There are still some marvellous Indian restaurants to be found in what's left of Drummond St on the other side of Euston Rd.

Directly opposite Agra on the corner of Whitfield Place was Stern's African record shop and I recall going in there quite a few times with a friend who would come to meet me for lunch. He often DJ'd and was really into World music of all kinds. The shop had an amazing atmosphere.

Pirroni's on Tottenham Court Road – another Italian restaurant where I used to go for lunch or meet friends in the evening. I can't find any ref of it now, but I'm pretty sure it was where Honest Burgers is today. I was told that the name had links to Marco Pironi the guitarist in Adam and The Ants which could be true seeing as he hails from Camden.

*Some time soon I'll do a series of Covent Garden in the 1980s posts.