So much is changing around Shoreditch these days. Low rise Georgian, Victorian and early C20th buildings are fast being demolished to be replaced with high rise glass blocks. I went to check on what's happening at the top end of Norton Folgate, a part of Bishopsgate that I'd understood had been saved from development. It used to be an interesting architectural patchwork as you can see here. 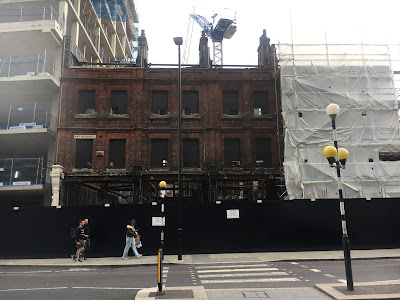 As my pic here shows, part of this terrace that abuts Folgate Street has [sort of] been saved but only those properties with red brick façades remain (some are covered in netting); the rest of these structures will be completely rebuilt albeit not as tall as the blocks that are going up to the left hand side which forms the beginning of Shoreditch High Street where once stood one of my favourite interwar buildings, a castellated showroom façade covered in beige faience tiles; Niclar House*.

Rather jaded by this, I went for a wander around the nearby streets to see what else has changed during this past year, specifically interested to see if two old hand-painted advertisements were still in situ in Holywell Lane. I'm glad to report that they are indeed still there but clinging on for dear life, so to speak. 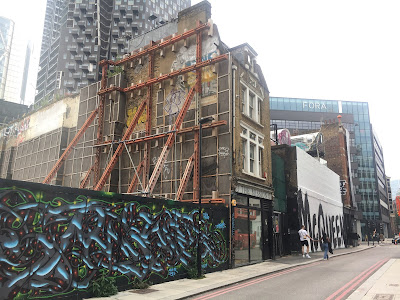 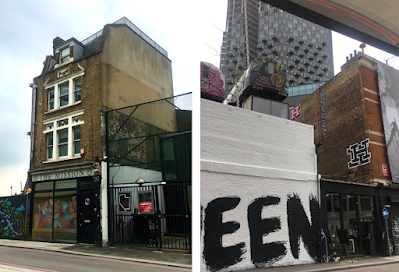 The two signs face each other across the now defunct Victorian railway line that has been replaced by the new section of rails for the Overground Line further along the street. It's really weird how these old buildings are somehow still hanging on in there surrounded by an undulating sea of tall glass.
The east-facing advertistement on the bottom right (above) is barely legible, and would need access to that upper level where the train carriages are to get a better view of the wording in the whole sign. Tetramesh has a better shot of it here. I originally thought I could see "MEX" in there at the middle right and wondered if this was a link to rubber from the Yucatan Peninsula in Mexico. Indeed, Milton Manufacturing Co cycle accessories was at this end of the street in 1915. Or it might be a ref to The East London Rubber Company or Rotax Motor Accessories who were both nearby in 1939.
But I have since had another, better, idea which also links to two-wheeled vehicles – I now think it's 'MAX' as in Max Steiner cycle accessories who were located at 35 Curtain Road, on the other side of the Gt Eastern St junction, for at least the period 1915-1939. More info on Max Steiner and the Pelissier brand here which includes some press ads. More can be found within Grace's Guide. I am pretty sure that, armed with the info in these ads, some of the wording on this wall sign can be deciphered.
The sign on the side of No.55 is much clearer. It reads 'MAKERS OF. CLOGS. DRAIN & SWEEPS. MACHINES.' – this photo shows it more clearly in the 1980s. Having assessed the late Victorian directories, I think this is a sign for two or more products or companies available in this street. 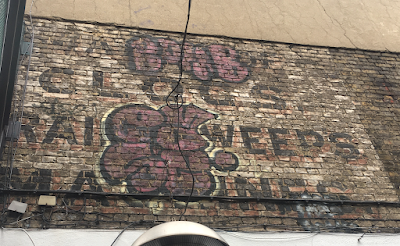 At the very top front centre of No.55 there is a clear date mark: GT 1893. This surely must be George Tyrie, brushmaker. He could well have made the railsweeps; brushes that were often fitted to the protuding section at the front of steam trains to sweep away the leaves and other debris. Or it could refer to brushes and brooms used by railway workers who cleaned the rails manually. A dirty job. 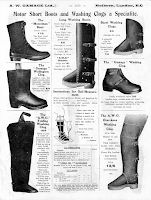 And this links in with another company in the street, because at the same time, in the late 1890s, on the other side of the road at No.12, George Stevens is listed as a washing clog maker. It's possible that he was related to, the son of, Thomas Stevens who was listed at No.39 in 1832 (this might be the same property and the road might have been re-numbered, but I haven't checked). Thomas was one of two French clog makers in this street, the other being George Martin at No.44, before the railway line and before the building on which the sign was painted when clogs had evidently evolved to become boots. These heavy duty items of footwear had canvas leg coverings, sometimes up to thigh height, tightened and kept in place by leather straps and buckles. They protected clothes and the wearer from splashes, see right (a page in a Gamages catalogue).

*Find out more – Niclar House features on London's Lamented Art Deco, my online talk via Zoom about some demolished interwar buildings and the structures that have replaced them. Click here for info. It used to form part of my Art Deco Spitalfields guided walk. Sigh.