On Wednesday last, after leading a lovely group of London Historians on a meandering route through Fitzrovia looking at 1920s-30s buildings (people call the era Art Deco but it mostly isn't!), I decided after a much-need drink in The Wheatsheaf, Rathbone St, to wander back up to Fitzroy Square and have a look at something other than interwar buildings. Specifically, I was intrigued to see how this area has evolved since I worked at 4-5 Fitzroy Square in 1988-90. 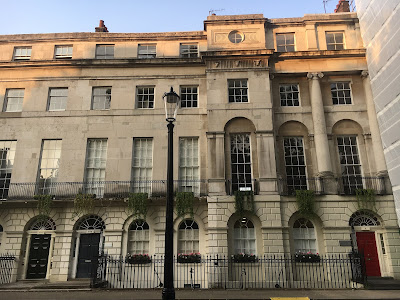 For just short of two years I was studio manager and typographer for Art Integrators, a small artwork company situated in the rear lower level of this building which comprised two co-joined Georgian houses, the main reception being in the hallway of No.4 (the red door) which since 2012 is called Willan House and home to The British Association of Dermatologists.

Art Integrators had external clients such as Cato Johnson, who I used to visit for briefs at Greater London House AKA The Carreras 'Black Cat' Factory which, coincidentally, is a building and company I talk about as a presentation via Zoom. We also did a lot of work for the other companies within the building, all of us being under the Gannaways umbrella. John Gannaway its founder and director took a great pride in the building and I recall vividly the colourful paint on the metal banisters in the stairwell and the paintwork too, all of which John had researched. At the time I thought the pinks, purples, blues an greens a bit strange, but you need only to visit Smithfield market to see the same palette. 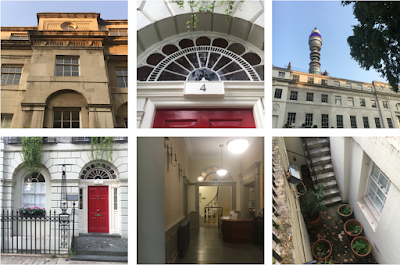 Looking at the building last week I noticed for the first time that there are three animal skulls within the frieze at high level. I have no idea what they refer to. I had also never noticed the fine fancy fanlight above the front door, though I do rememer the front door being mid-grey. And now I'm noticing that gorgeous lampholder and the railing. I have no recollection the great view of the BT/PO Tower as you exit the building. I obviously had other things on my mind back then.

Intrigued at whether anything could be seen inside, I peered in through the window at the side of the front door to see that the hallway is the same as I remember as regards layout and fittings but today the colours are muted, bland, very tame. Very pale grey and magnoila. There's no way the Georgians, the Victorians, indeed the early C20th century bright young things would have lived in anywhere as dull. poor John and all his hard work. I peered down into the front basement area and remembered the two Johns and Frank who used to work out of that office, yet I am not aware of them using these steps. Instead, they would access through Art Integrators, going past my desk, back and forth to Solar Typesetting which was situated at the very rear of the building abutting Grafton Mews (see below).

I really liked the guys in Solar, in particular Mick and Ron the bosses who were always always immaculately well-dressed in that old-school 1960s way; shiny shoes, tie pins, clean hands and aftershave. They sometimes let me use the compositor machine to make my the headline lettering for jobs myself, the machine being a kind of enlarger that produced crisp-edged large format letters on photo-quailty paper. Using turning handles to get the right size and focus on a single character you then hit the button to photograph it, then moved on to take a snap of the next letter. I was so in my element there as, since starting in the industry back in 1980, it had often been commented on that I have a natural ability for letterspacing; The Queen of Letraset – a skill I think is sadly lacking these days where you can often easily 'drive a bus' through the gap in 11 and then blame technology if anyone points it out. 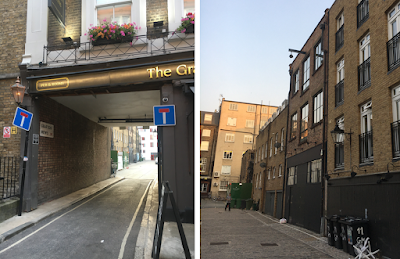 I particularly recall how I liked working with affable and super-efficient, self-effacing Bob, one of the Solar typesetters, and how impressed and intrigued I was at how he/they could turn my mark-ups supplied to them as instrucutions on A4s into beautiful long silky sheets of words, often created overnight to be ready for me next morning, having typed up the whole thing up manually, looking at screens of coloured codes and symbols that to my mind looked nothing like my starting point or the marvellous end product. there ceratinly was no opportunity for amendements. Once it had gone to the typesetter that was it. Any changes were costly. Unless, like me you were adept with the PMT camera and bit of clever cut and shunt. Today, just like I am doing here, we can amend our copy as we go along and change styles and fonts in seconds, effectively acting as designer, typographer, typesetter, artworker, even printer, all at once. Jacks of all trades. Masters of none.

There was a wonderful exchange of ideas and skills between AI and Solar with many of our in-house  chats taking place in Ian's office, someone I was to keep in touch with for years to come. Indeed, when I was made redundant from this company in October 1990, a fate that befell most of us there, I had by that time made good friends within the building and many of us stayed in touch furthering each other's careers going forward. Who was it who said "workmates are friends your boss found for you"?!

This got me thinking about bygone times, places and people connected to this company, so I sat down on one of the benches for a while to try and remember the people I worked there. Let's return to the front door and then travel around the building.

I cannot now recall who or what was in the office to the immediate left of the front door, ditto the room beyond the reception to the left. I think it was probably a marketing company that I rarely had to deal. My department, Art Integrators, was down the stairs towards the rear. There was an office to the right of the corridor and the main studio to the left. The corridor then lead to Solar and a back door to Grafton Mews.

Returning to the stairs and going up to the first floor front, John Gannaway and his business partner Eddie (aaargh, can't remember his surname), their jolly can-do PA (again, name drain here. Jackie? Janice?) had offices either side of the lovely conference/meeting room which ran across the front of the building and in a previously time zone would have been a family dining room/reception. The accounts dept was adjacent to the stairs. I am now remembering bubbly colourful Janet from accounts, she was marvellous. I loved it when she did the rounds handing out the payslips every month. Indeed, as with most accounts depts, they went a bit party-mad whenever the was a birthday or party celebration on a Friday. I think this is because, unlike the rest of the company who were in pubs practically every lunch time and after work whatever day it was, they had to keep a clear head for figures and restricted their binges.

First floor rear was The Sharp End, another design and artwork company, headed by Keith, backed up by head creative Roger and managed by Chrissie. This larger studio worked mostly for the large holiday companies of the day producing brochures and ads, with a lot of work coming in from Yugotours, much of which also filtered down to AI. Staff at AI included Nigel, Jane, Chris, Paul, Erica, Dylan, Debbie, [Miss] Watmough on telephone and secretaral duties; I can hear her lovely husky south London accent in my head as I type this. At certain times both studios were full to brimming expanded by freelance artworkers employed to produce the paste-ups for those thick holiday brochures. Paste-up, for the unitiated, involves paper, glue, scalpels, Rotring pens and PMT machines. The end products then get photographed by a reprographic company pre going to print. Wow. To the under 40s this must sound like I am writing in a foreign language. How times have changed.

So back to the tour... The upper floor was Gannaways advertising company. Here goes, and sorry if I miss anyone out, but hell, this was 30 years ago... production dept by the stairs comprising Phil, Tim and Ruth (strong Wakefield accent). Client handlers Hilary and Andrew (who, coincidentally links in a different way to the Carreras building mentioned above), creatives Dexter, Paul and another well-spoken bloke who's face I can see but name I can't recall (?Rupert) worked on a lot of film company and VHS ads (we all used to go to screenings in Hammersmith. Happy days). Barry the illustrator in the central zone opposite the marriage of Jon (pictures) and Leon (words) with Mike the creative director in the corner room. Phew! I think that's the whole building done.

When I'd only been working there a few weeks a photo was taken of all employees outside the building. I was wearing a hat I had recently purchased from Zone at Harvey Nichols. I've still got that hat. It's like a cross between a lady's riding hat and a funeral director's top hat. I never got a copy of the group photo. However, I do have a few photos of some of the people mentioned above – please do contact me if you are interested and I will send them to you.

Sitting on the bench, looking at the laminated aggregate that now runs a full ring around the beautiful gated gardens at the centre, I was reminded that back in the 90s there were fuctioning roads with parking spaces all the way round and at lunchtimes I often went inside the gardens with workmates. I don't recall anyone having a key or opening a gate. I am sure we simply walked in and sat on the grass, though I suspect it was only accessible on certain days and times. 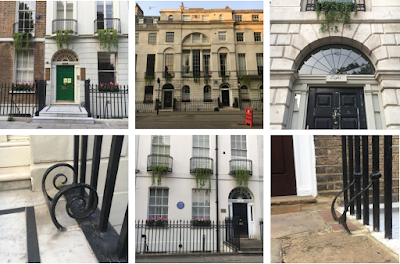 It's doubtful that 4-5 Fitzroy Square was initially designed to be one property being as the columns above No.4 are not repeated on No.5. It's an enigma. Simliar pairings are evident further along and are more easily discerned being symmetrical in design as regards their additional embellishments. I suspect one door would have been used by the owners for slipping in and out unannounced, and the was other for visitors, with servants/trade making use of the access at the rear. However there are other divisions, such as shown top left here (green door) which show a history of change.

Other points to note along this side of the square, shown above: some lovely metalwork in the form of balconies, railings and boot scrapers, and more beautiful delicate fanlights. Within the upper pediment of 7-8  it looks as if some architectual details in the form of floral motifs have been removed. The blue plaque commemorates Charles Eastllake, 1793-1865, Painter and First Director of the National Gallery who lived here (for a length of time unspecified!).

I will continue my observations in this area in another post.