A couple of weeks ago I went to an interesting exhibition at Cecil Sharp House, the home of english folk dancing, in Camden NW1. The building is fairly nondescript and belies what goes on inside.
It was first built in 1929 by architects Henry M. Fletcher and Godfrey Pinkerton and at that time was thought to be very modern which seems at odds with folk dancing which keeps old traditions alive.
During WWII the building suffered bomb damage. John Eastwick-Field and Hugh Pite were engaged to make renovations and extensions and in June 1951 the building was reopened by HRH Princess Margaret.
It was during the post-war revamp that six lovely carved reliefs were added around the entrance, three on one side and three on the other, depicting old english dancers, musicians and revellers. A signature at floor level shows the artist as G. Herickx. I particularly like the man on his hobby horse – he looks so stern, so serious compared to the others! 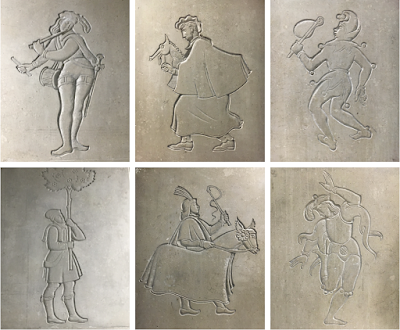 I tried to research the artist in the hope of finding his carvings elsewhere. Nothing of this kind but I did find a Geoffrey R Herickx who, with a name like that, I thought might be the same person. Sources say he was born in Birmingham (but when?!). He painted pastoral/english scenes then, in the 1980s, he produced a series depicting aircraft in flight. He now specialises in miniatures. If this is indeed the same person we can assume that if he was in his early 20s when he created these six panels he will be almost 90 by now.
I asked for further info (see comments below) and have since found out that these are by Gordon Herickx.

As for Cecil Sharp House – there's always a variety things on offer with many different kinds of dance classes, not just Morris, such as tango, clog and salsa. Plus there's live music, workshops and more.
More about what's on at CSH here.