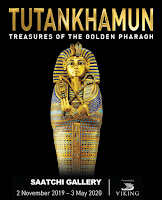 Last week I went to a preview of this exhibition and it's been playing on my mind ever since as to what to write here. I was initially excited to be going to see the exhibition, but for many reasons it's been troubling me. And will continue to do so.
The show is on tour "to celebrate the 100th year anniversary of the discovery of Tutankhamun's tomb". Hmmm... I think "celebrate" is a dodgy word here. "Commemorate" or "mark" might be better. But more of that later.

The 150 Treasures of The Golden Pharaoh are indeed amazing. The attention to detail, the fine handiwork, the quality of the artefacts, is truly outstanding. Most of the pieces on display look like they were made last week; they are so shiny and perfect. I am in awe of the craftsmanship of these ancient people.

I was intrigued as to how the Saatchi Gallery would manage to display everything being as the gallery rooms are not well-linked, as per, say, the Royal Academy where one room leads to the next. Let's just say it's not good. I was there before the exhibition opened to the public and I can't have been the only one complaining about the lack of signage or misleading information.
Here goes... 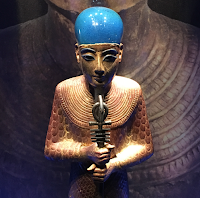 On entering the show you are treated to a short wide screen film about the location of the Valley of The Kings, what the Egyptians believed about death and gods etc, and an overview of the discovery of this particular tomb. You then enter the first gallery room which is full of gorgeous artefacts. All lovely items, yes, but I must admit that I rather thought the show might be sort of chronological and perhaps make it feel like we were entering the tomb as Howard Carter did to give a sense of discovery. But no – it's boom! bang! here are the shiny gold things!  I found it hard to place what I saw in context with the tomb. 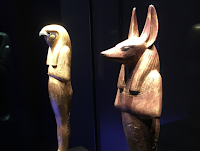 More beautiful artefacts in the next gallery and the next. People faffing with the audio handsets which weren't explained properly – note that you need to enter the number that's on an exhibit and then wait a few seconds for a click and then a few seconds more for a voice. Shame there's no fast forward or rewind. I gave up. Though listening to the talking was preferable to the having to endure the dreadful ambient music. Is it supposed to sound as if it comes from 3000 years ago?! 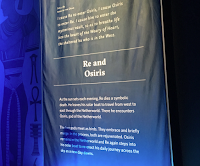 I was constantly distracted by the display and info panels in the galleries. The walls are all plain grey or have printed panels attached to them. The doors between the galleries have been half-heartedly designed to look like temple doors but they are painted dark grey. Why not sandstone colour? And why aren't the walls of all the galleries designed to look like the inside of the tomb or an Egyptian temple? If IMG, the event organisers, can afford to get panels printed then why not choose or create evocative imagery for them? 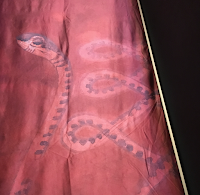 Many of the printed info panels were crumpled and creased and poorly stretched onto the frames. Close inspection showed a range of different man-made oil-based fabrics some satin, some textured, some like neoprene, some rigid. But none appear to be very eco-friendly. Here's the Egyptians using wood and stone and natural components yet here in the 21st century are displaying them in a sea of plastic. And and don't get me started about all the exhibition-grade grey carpet also in use here that gets trashed at the end of every event... grr.

From a typography and design perspective, the information on the panels is also a mess. There doesn't seem to be a style guideline. Surely the same typefaces could have been used throughout as the event toured? I must have counted at least six different typefaces and sub-fonts yet none of them looked very Egyptian. Most text is set ranged left, yet smaller info panels are fully justified (a crime unless it's a text book!) with so many ugly hyphenations including proper nouns such as, get this... "Tutankha-/mun's", "Tut-/ankhamun", and "Neth-/erworld". Oh yuck!

I spoke to someone from IMG about the ugly signage and her excuse was that the exhibition had been travelling and they couldn't change it. Er, really? Another excuse for this evident lack of quality control was that the exhibition is now nearing the end of its tour. I assume she meant that it's too late to bother now. I didn't like to point out that I doubted that this wouldn't have been in english language when the exhibition was in Paris, for instance, and it's unlikely that all the exhibition spaces worldwide are the same height and width. The pharaohs would not have put up with this!

The galleries on the ground floor are full of lovely artefacts. It's then up a staircase (or use the lift) to get to the upper the galleries. On finally entering Gallery 4 there is, what I later understood to be one of the most impressive finds, the wishing cup. Yet it's sited in a dull room that looks like just a lobby to a better place. I sat at the bench there to write notes. An audio kicked in but I didn't really pay attention until I realised it was about the discovery of the tomb, so I watched it for a few seconds and then spoke to a steward to tell them that hardly anyone will stop and pay attention after they've seem rooms full of marvellous things. People will just want to move on and find more gold.

Ah, but there isn't any more gold after that, except for a gorgeous necklace/ pectoral chain with an interesting story that I as good as walked past without noticing, only returning when I realised that the room was all about Howard Carter's find and the layout of the tomb etc. Which begs the question, WTF is this doing on the upper floors?! It would have been better placed in the first gallery to tell the story and then have it followed by the wishing cup and all the other artefacts. And the diagram of the tomb would also be better placed down there. Actually, put the diagram in every room with a dot showing where each piece was located when it was found.

Gallery 5 has a big statue in it. I am being flippant here. It's marvellous. Impressive. I moved on to Gallery 6 and found it's not a gallery; it's a gift shop which continues through into the next room. So misleading. And the shop looks like it was thrown together last week. Well, it probably was.
There were a couple of red virtual reality pod things on the top floor – these are immersive experience thingies. I didn't get to try one out. Lots of them should, by now, be arranged in that room resembling the alien nursery in the first Alien movie. I think they should be turquoise blue pods rather than red – perhaps they are left over from an exhib about China?! Also on the top floor you'll find  some interesting work by artists in residence. I like the crochet reference.

Basically, I left the Tut exhibition disappointed and a bit annoyed/frustrated. It's clear to me that the Egyptians' attention to detail has not been followed through in these slap-dash modern surroundings.
If young King Tut is still looking over us (he believed he'd still be alive if we continue to speak his name) then he will be disappointed too. The stipulations in his will asked that his mortal body be buried forever with all that he needed for his next life. Is this really what he would have wanted?
When we ask to be buried in a certain place do we really want to be dug up by tomb-raiders masquerading as historians who are really on a treasure hunt for personal kudos just trying to prove how much cleverer they are than the ancients? These people don't "discover" the tombs, like some kind of fortuitous accident – they hunt for them, they track them down, like completing the hardest puzzle, solving the most complicated riddle.
I wonder... shouldn't all these artefacts be still in the Valley Of The Kings where they were designed to be? Thousands of years of years buried away until some bloke in a pith helmet bursts the bubble.

Walk like an Egyptian – join me on one or both of my guided walks in Central London – see the schedule here.