This is the final part of my walk along Kings Road

I bet most people walk past this beautifully understated piece and don't even notice it. But, please do stop and take a look, because it's lovely.
A bronze life-sized Venus, holding a vase and pouring water from a conch shell, kneels upon a bronze vase-shaped basin decorated with a whimsical relief of Charles II and Nell Gwynn along the Thames. This sits within and above an octagonal stone pool lined with blue ceramic tiles. 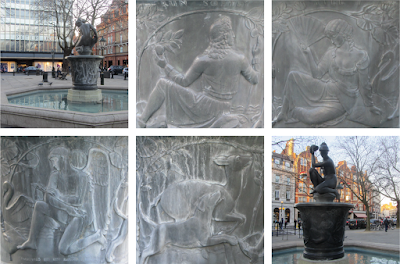 It was created by sculptor Gilbert Ledward R.A. (1888-1960) and was intended to be ready for Queen Elizabeth II's coronation but, sadly, there were problems over its instalment and the deadline was not met despite the date inscription*.
It is a reference to the Kings Road which was built during Charles II's reign. Just to the west of Sloane Square was the house where Nell Gwynn, his mistress, stayed on occasion. The vase depicts the lovers seated by the Thames – Charles picks fruit from a tree, whilst Nell Gwynn fans herself. An impish cupid sits nearby with two arrows ready and a deer and hound run in the background whilst a swan swims past.
The inscription around the top of the basin reads, "Sweet Thames run softly, till I end my song", from 'Prothalamion' by Edmund Spenser (1552-1599). The poem was a spousal verse written to honour a double marriage, the title meaning a song preceding the marriage ceremony.
A proposal in 2006 for Grade II listing was not approved.

*The inscription at the bottom of the basin reads: 'GLIBERT LEDWARD RA 1952', and beneath this, 'PRESENTED BY THE ROYAL ACADEMY OF ARTS THROUGH THE LEIGHTON FUND'.