A walk along Kings Road (part 2) – The Chelsea Potter, RSoles and The Pheasantry/PizzaExp 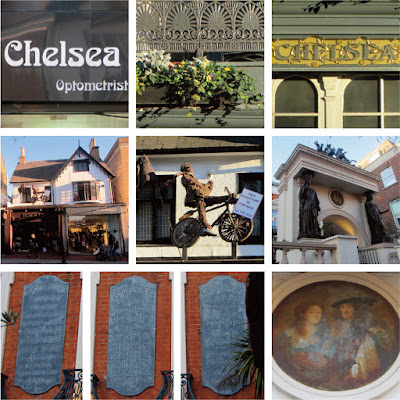 An Art Nouveau-esque typeface on the optician's sign uses a cut of Arnold Böcklin by Otto Weisert harking back to the 1960s when this kind of retro look was very 'in'. Think Biba.
Next, The Chelsea Potter's ornate railings and pub sign.
On the next row, hints of the road's distant history can be glimpsed when looking at the lovely old house, home to RSoles boots and shoe shop. Note the  quirky cyclist art for sale above the ground floor. Possibly sold by the time you read this as I took these pics in March.
And then we have the splendid Grade II listed Georgian frontage of The Pheasantry, so called because in and around 1865 George Samuel was breeding pheasants, cattle and foxes at this site. Three plaques on the building show that the site was occupied by Amédée Joubert & Sons (1880-1914) who seemed to be masters of a multitude of trades including upholstery, cabinet making, wood carving and gilding. They also manufactured bedding and furniture and imported and restored tapestries and carpets. It would have been during this period that the triumphural entrance, the courtyard and architectural mouldings and details were added. AJ&S produced and sold not only full size items but miniatures for dolls' houses.
After 1914 the building became the home of a dance studio/ ballet academy, and was used as studio space by artists. In the mid 1930s the basement was turned into The Pheasantry Club and for decades was a popular haunt of artists, actors, writers and the like. It closed in 1966; the basement became a nightclub and the upper floors were converted into apartments.
It has been a branch of Pizza Express for as long as I can recall (date to be checked).
I can't find any info as to who the two people depicted in the roundel on the main gate are (shown in the pics bottom right). Possibly it's Monsieur Joubert and his wife? ... any ideas?