Back in September 2012 I went to an exhibition about the past, present and future of architecture in London. It was called The Developing City and I took some photos of the information there. I rediscovered the pictures when looking for the Norton Folgate pics I posted last week. Strange how I never put this together before now. Here goes...

The exhibition was set out chronologically; there were lots of informative panels about the City of London and how it has been transformed and adapted over the years. And there were some great old archive photos.
One thing that especially caught my eye was a proposal for the site where the lovely old Grade II listed Mappin and Webb building used to be, now occupied by that hideous lump that looks like a Battenberg cake or a 1930's wireless.

As you can see, The Prince Of Wales had his Hideous Carbuncle hat on referring to the glass tower as a "giant glass stump" and he helped to put a stop to the scheme. So, it begs the question, how on earth did we end up with so many other equally hideous, even larger, glass stumpy things since then?
Moving westwards along Poultry and into Cheapside, let's look at Cheapside in the past, shown in these four pics with St Mary Le Bow at the centre:

In the past, London was more compact and Cheapside was a fashionable bustling shopping street lined with every kind of shop imaginable. Most of these grand buildings managed to remain vertical through WW2 but by the twentieth century the men with the purse strings had decided to that most of the street ought to be replaced with glass and the proles needed more clothes and coffee flavoured water. So the Dubaiification and homogenisation began and in the last decade we have ended up with this:

After the Great Fire of London, Wren proposed a complete re-working and re-building of the City. The close up on the right shows clearly how the church spires all begin well above the rooftops of the houses, shops and offices beneath:

Then, in the middle of the twentieth century Hitler tried very hard to flatten the City, as shown in the B&W panoramic photo, below, of the Barbican area taken in 1942* which is where the Barbican was built (but that's another story). Compare and contrast with what looks like bomb damage in the second image but is actually a photograph of the wilful clearance and construction of One New Change (shown in the Streetview images above, top right). 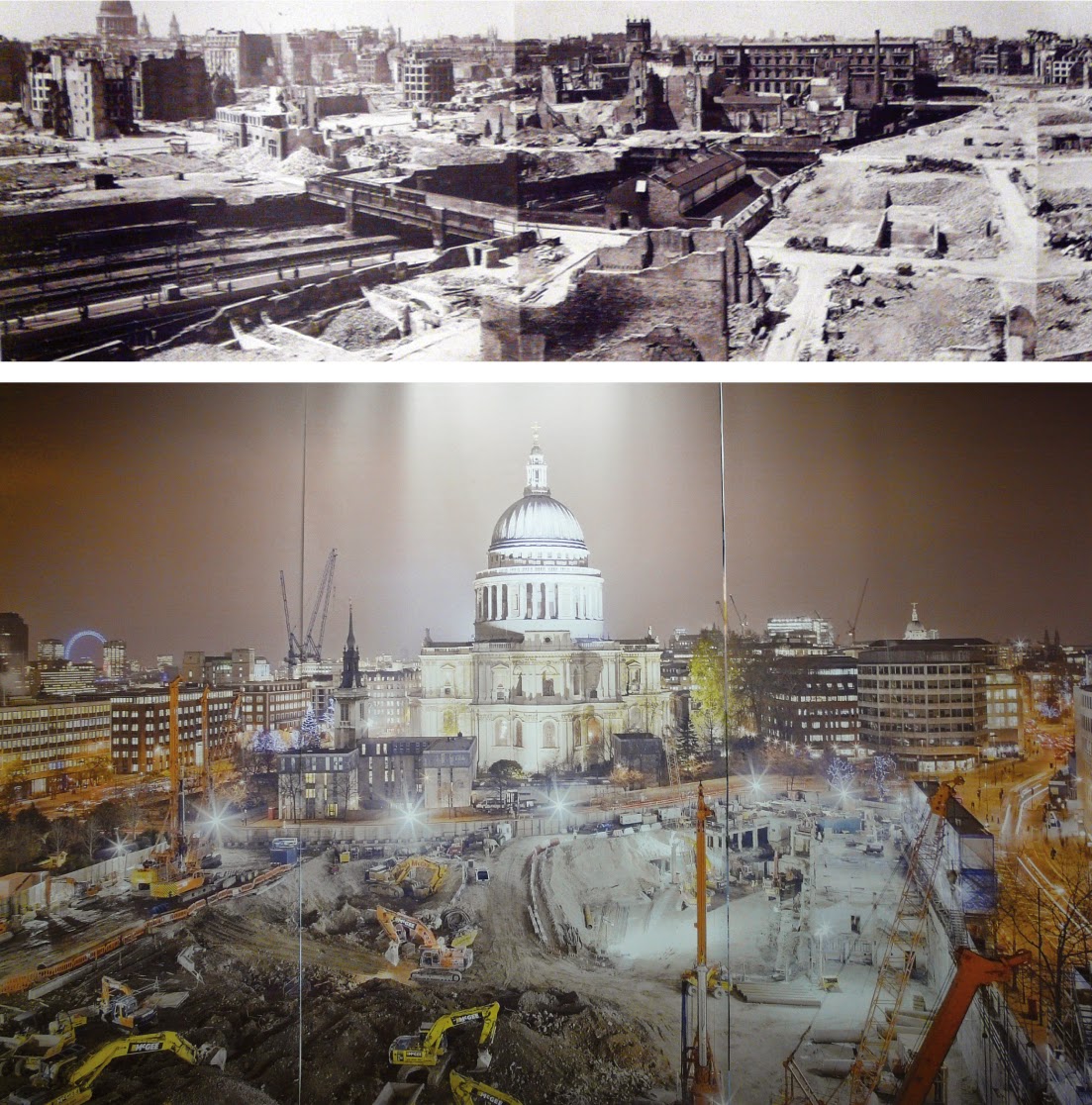 In the middle of the exhibition space was a large scale model showing what was to come. I stood aghast at the glass. It saddened me. In the same way this does. Most of this has happened already. It's all happening way too fast for me. 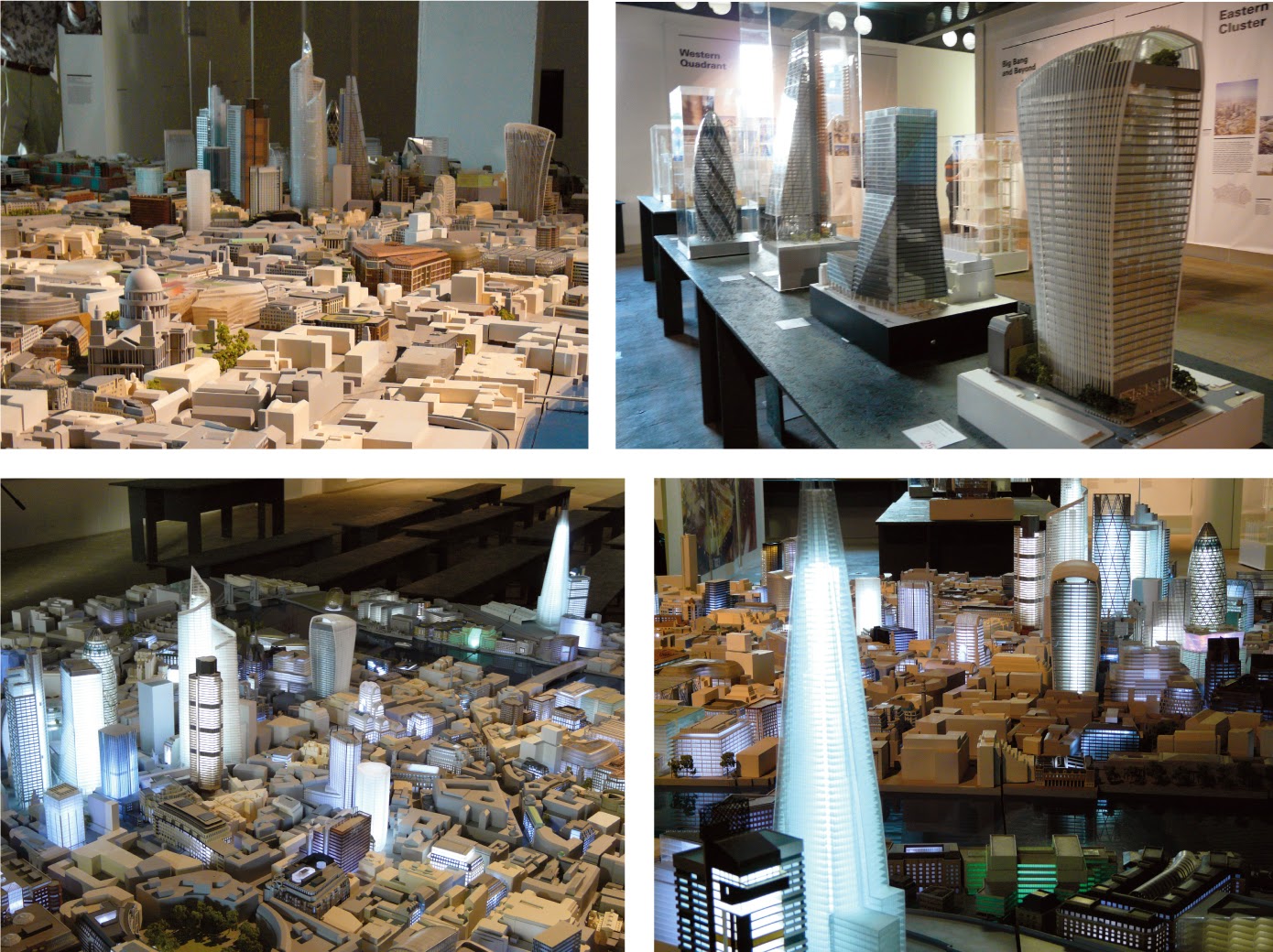 I didn't stop to look at many of the boards showing ideas for the future. It all looked a bit plastic and manufactured to me. I am hoping I will be dead by then. What happened to those words they were flinging about pre-Olympics; 'sustainability' and 'legacy'?

One more observation... 'we' are knocking down old buildings made of natural stone that was created by compressing of layers and layers of dead matter over millions of years. In the space of a few days these noble blocks are demolished; discarded or used as rubble, to be replaced with manmade composites and factory components; glass, steel, carbon fibre and the like that will last a fraction of that time. It's all about the money, honey. Money talks and calls it progress.

*This image, and many more like it, can be found at The London Metropolitan Archives.