Walking through the Rotherhithe Tunnel

Jen had been on about doing this for months. We finally agreed a date and met at Rotherhithe station on Sunday 14th September – a Sunday being chosen because the tunnel would be less trafficated*
There is pedestrian access to the tunnel opposite the station. We walked down the stairs (there is a similar set of stairs further down the soft slope on the opposite side and a similar arrangement at the north side) but then we turned right/south so that we could walk the full length, stopping to admire St Olav's Norwegian church with it's lovely long boat weather vane and the BRUNEL artwork near the mouth of the tunnel by Kevin Boys and Steve Cornish. 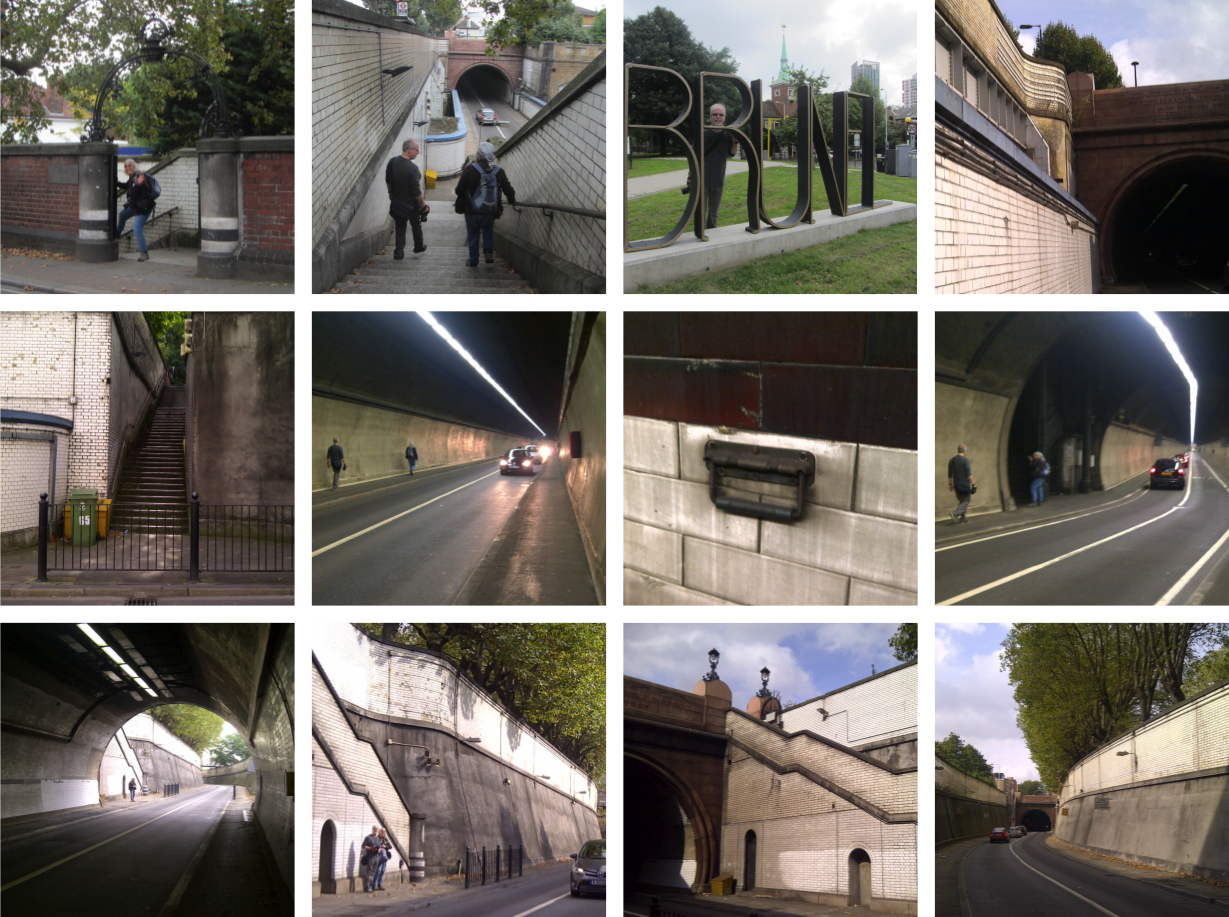 And so we set off for our march through the tunnel. I walked on the east side and Jen and Malcolm were on the west side. J+M got to briefly examine the old ornate Victorian access stairs that come up next to the Brunel Museum on the south bank and within King Edward Memorial Park on the north. These now house the extractors and there are signs saying not to loiter due to the fumes. Ugh.
On my side I had the green signs indicating how far there was to go in either direction and I also spotted that there were evenly-spaced rectangular metal handles about six inches wide all the way along at shoulder height. I am guessing that perhaps these were used to tie frightened horses to, or something similar. Answers please.
"Beer" said Malcolm as we exited. Being a Sunday we had to wander the Limehouse streets for a while until the pubs opened at noon. I took them over to York Square Gardens and we investigated a gorgeous little row of Georgian house in Flamborough Walk where front gardens must have been truncated when the railways arrived.

Hurrah. Noon! Beer o'clock!  I'd spotted the The Old Ship on the corner of York Square Gardens when I was in the vicinity a month before – it's got a Mercer's maiden on it.
Lovely pub, lovely people. Good cheap ale and proper hand-made fresh sandwiches. They do cabaret nights, open mic nights, there's a beer garden (not needed really when it's a corner pub with street seating), and the place is festooned with amusing and interesting knick-knacks. I can't recommended this place highly enough. I'd be more than happy to have it my local.

Read Malcolm's account here and be sure to scroll down and see me imitating a breakdown.


Caroline also walked the tunnel in 2013.