The tiles of Tottenham Lane and Hornsey

At the beginning of last century, Crouch End and Hornsey looked rather different – Edwardian high streets would have been lined with shops beautifully decorated with tiles and fancy ironwork. And many of them would have had a lot of produce outside the shop, hanging above, around and in front of the window, with the owner and staff smartly dressed in white aprons ready to greet their customers.

At street level, most London high streets show barely a hint of their past these days, but this area of N8, probably due to it's lack of tube station and minimal bus connections, still has a few shops that display some lovely glimpses of the past. I mentioned some of my observations in a post earlier this year. This time I am concentrating on the tiles.
And what amazing tiles! It's hard to fathom how they were chosen to go together as never in a million years would I have thought to put such patterns, colours and textures together on the same wall. But they look fantastic.
The pics below are from just three different shops: 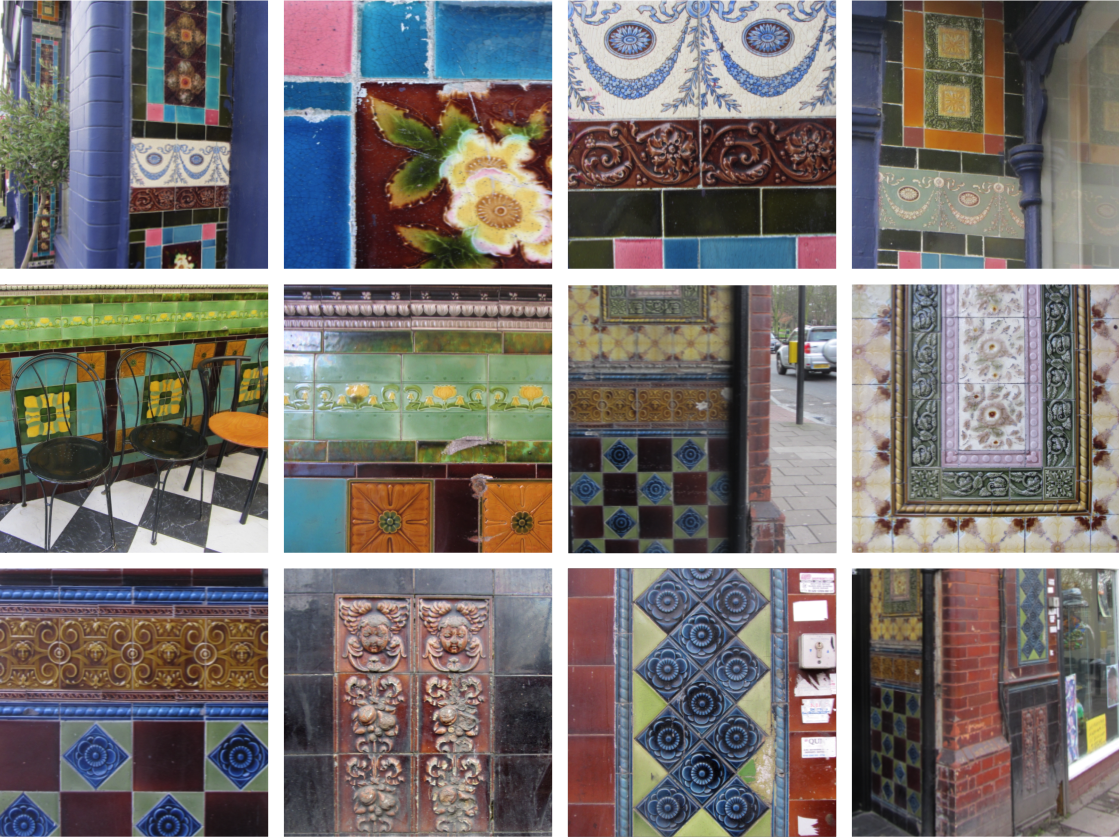 Top row: On the corner of Tottenham Lane and Harvey Road is Garden Transformations who have painted their double-width shop bright blue and kept these tiles which are along the side street (phew!). The mix of colours and patterns is bonkers! As you can see from the pics above, florals are placed next to bright pinks and turquoises, with swags and brown reliefs all mixed in too. And, notice too, that the old curved window frames are still in place along that face.
Middle row 1 & 2: Also in Tottenham Lane. I found these by accident because I had a strange urge for a bag of chips – it must have been serendipity because on entering George's Fish Bar I was amazed to find that the shop is tiled on both sides up to dado level with these wonderful golds, blues and greens. I chatted to the owner and he tells me that there has been a fish shop there for over 100 years; that the tiles are from the first ownership (though he isn't George and he isn't related to George or his family). But how lovely that the tiles are still in situ. Shame the outside of the shop doesn't retain any of the original features though. Now it's got me wondering how many other shops along that stretch have tiled interiors...
Middle row 3 & 4 and all of the bottom row: These tiles are from either side of a what must have been a terrace of similarly-decorated shops in Hornsey High Street. It's a japanese restaurant at the moment. The crazy mix of Edwardian tiles on both sides of the recessed window have been retained over the decades – I can't see a trace of paint on them, just a few stickers.
Here's how the junction at Middle Lane has barely changed except for the look and feel of the shops and the kind of things they sell. The shops back then just looked nicer.