I popped into St Pancras Station on Sunday 13th because I had heard that an orchestra would be there who make music using the unused parts of vegetables as part of World Food Day (16th October). Watch this video which explains this cause far better than I can attempt to do so here. It includes footage taken at the station.
Whilst there I also picked up some information from Action Against Hunger. It's appalling to think I am living in a country that throws away a lot of unused  food, yet there are people in the world who are barely surviving. A lot of these people are living in countries who grow and export foodstuffs to countries such as the UK. Need I say more? 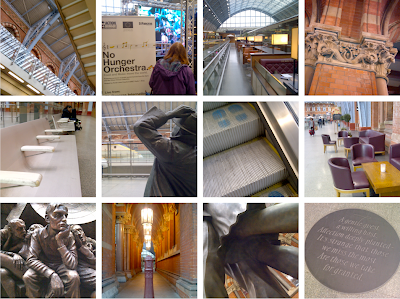 Whilst the first floor of St Pancras is a buzzing with people milling about going here and there, drinking, eating, shopping or just waiting for trains, the upper level is rather quiet. And it's a shame. The "longest champagne bar in Europe" had only two tables full that Sunday afternoon, and I was the only person admiring Martin Jennings' affectionate statue of Sir John Betjeman. Though there were a few people looking at that hideous oversized statue of the kissing couple. I popped in to the Things British shop to check on my product display. Tom has written about the shop on his very inforamative site here.
Seems to me that the lack of people on the first floor is down to access from the Euston Road and KX. Many people new to St Pancras Station do not appreciate that it's actually quicker and much nicer to go up the short flight of steps at the front right which takes you to the original entrance close to the old ticket hall which is now part of the gorgeous hotel (see my pics of the interior below). From the first floor you get the best views of the whole station and it's wonderful unsupported roof before taking the stairs or escalator down to the platforms.
Contrast this with the maze as you enter from street level and then collide with tube travellers and get coralled into a shopping mall. Ugh! 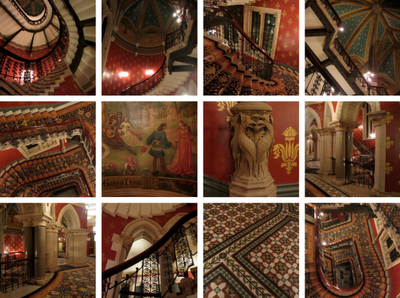